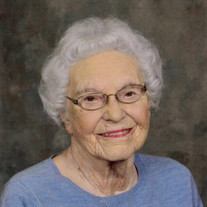 Adelle (Burgess) Nicholes, age 98, passed away peacefully Thursday evening, September 16, 2021. She was born October 23, 1922, in Muskegon to John and Angie (Kooi) Burgess, the oldest of four children. Adelle grew up in Muskegon amongst her extended family of grandparents, aunts, uncles, and cousins. She moved to Royal Oak, Michigan after WWII with her husband Clayton “Nick” Nicholes. Adelle and Nick met when she was in kindergarten, and he was in first grade. They were married for 71 years. In Royal Oak Adelle worked at several bookkeeping and secretarial offices, retiring from Royal Oak Public Schools in 1975. She then moved to Florida where she lived for 27 years before moving back to Muskegon. She enjoyed singing in her church choir, long walks, knitting, games, golf, Lawrence Welk and entertaining her family and friends. She volunteered for a reading program for young children while in Florida and attended Bible study all her life. She was a member of Hope Reformed Church in Muskegon, where she had been baptized as a child and married as a young woman. She was preceded in death by her husband and brothers and their spouses, John and Alvena, Carl and Audrey, and Rodger and Judy Burgess. She is survived by her daughters, Judith Nichols of Lambertville, Kathy (Clayton) Trible of Holland, five grandchildren, Jim (Tricia) Nault, John (Katie) Nault, Lauren (Jan) Trible-Laucht, Andrea (Steve) Meyer, Erin (Mario) Paone; ten great-grandchildren, Mason, Madelyn, Makenna, Willem, Estelle, Adriana, Declan, Sebastian, Asa, and Cecilia. She is also survived by many beloved nieces, nephews, and friends. Adelle’s family wishes to especially thank the staff of the Leila and Cyrus Poppen Hospice Residence for their excellent and gentle care during her stay with them while negotiating this last year of her life. A memorial service and celebration of Adelle’s life will be held on Saturday, October 2, at 11:00 AM at Hope Reformed Church, 1878 Evanston Ave., Muskegon, 49442. Visitation will be one hour prior to the service. Burial will take place at Restlawn Cemetery. Masks are recommended for the service, but not required. Contributions in memory of Adelle would be appreciated in lieu of flowers to the Harbor Hospice Foundation with a designation to the Leila and Cyrus Poppen Residence. Arrangements have been entrusted to The Sytsema Chapel of Sytsema Funeral and Cremation Services, 737 E. Apple Ave., Muskegon, MI 49442.

Adelle (Burgess) Nicholes, age 98, passed away peacefully Thursday evening, September 16, 2021. She was born October 23, 1922, in Muskegon to John and Angie (Kooi) Burgess, the oldest of four children. Adelle grew up in Muskegon amongst her... View Obituary & Service Information

The family of Mrs. Adelle (Burgess) Nicholes created this Life Tributes page to make it easy to share your memories.

Send flowers to the Nicholes family.