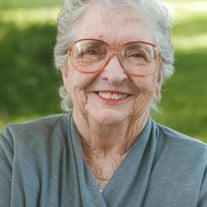 Alyce Ann McLaughlin of Fruitport Township passed away August 25, 2021 at the age of 90. Alyce is preceded in death by her husband of 64 years, Richard McLaughlin, seven brothers, and three sisters. She is survived by her brother Clair Soseman of Omaha, NE, sons: Michael A. (Rebecca) of Muskegon, MI, James R. (Renée) of Grand Haven, MI, David L. of Muskegon, MI, Terrance J. (Nina) of Naples, FL; twin daughters: Kathleen M. Burress (Timothy) of Whitehall, MI and Colleen M. Clark (Jack) of Grand Haven, MI, seventeen grandchildren: Erich, Brendan, Erin, Kristi, Stephanie, Kimberly, Samantha, Amy C., Angela, Amy M., Madeline, Natalie, Rogan, Keegan, Elaina, Brianna, and Nolan; twelve great-grandchildren, and many beloved nieces, nephews, great nieces, and great nephews. Alyce was born on the family farm in Bloomfield, IA and graduated from Omaha Technical High School in Nebraska where she was voted “Sweetest” and “Cutest” by her classmates. She has fond memories growing up in a large family, corresponding with her brothers during the war, her mother playing the organ, and travelling across the US and Cuba with her girlfriends. During her lifetime, Alyce contributed to numerous groups in Fruitport and was a long-time member of Fruitport Congregational UCC. She was an avid reader and bowler and cherished attending yearly family reunions in Iowa. After her kids had grown, she worked as a food presenter at Meijer and Fruitport Foods. Her and her husband spent retirement traveling, taking many cross-country motorcycle trips, and later spending winters in Punta Gorda, FL. The family would like to give special recognition to her caregivers: Katilyn, Tony, and Lisa who visited with Alyce in her own home. She recently moved into memory care at White Lake Assisted Living. Their caring staff let Alyce’s personality shine. She adored everyone and will be missed by all. Visitation is Saturday, September 18, 2021 at 10:00 AM, followed by an 11:00 AM Memorial Service and Luncheon at The Lee Chapel of Sytsema Funeral & Cremation Services, 6291 Harvey St, Norton Shores, Michigan 49444. She is laid to rest at Pine Hill cemetery in Fruitport, MI. Donations in Alyce's name can be made to the Agewell Services (Meals on Wheels). Sign the online guestbook at www.sytsemafh.com

Alyce Ann McLaughlin of Fruitport Township passed away August 25, 2021 at the age of 90. Alyce is preceded in death by her husband of 64 years, Richard McLaughlin, seven brothers, and three sisters. She is survived by her brother Clair Soseman... View Obituary & Service Information

The family of Alyce Ann McLaughlin created this Life Tributes page to make it easy to share your memories.

Send flowers to the McLaughlin family.