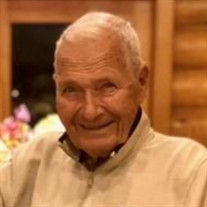 Anthony John Lisman Sr., 85, of Norton Shores, Michigan, passed away on April 3, 2022 and is now with The Lord. Tony was born on September 28, 1936 to Theodore and Maria Lisman in Utrecht, Netherlands. There, his mother was a pharmacist, and his father owned a butcher shop. After surviving World War II, in 1948, his family immigrated to the U.S. sponsored by two uncles who were priests. They settled in Fort Wayne, Indiana where he graduated from Catholic Central High School. At age 18, Tony committed himself to serve his country in the United States Air Force. After studies through Indiana University and the University of Maryland, he became a medic and served in Japan during the final stages of the Korean War. After completing his service in the Air Force, the Lisman family moved to Muskegon, Michigan where Tony worked alongside his father at Anderson Packing. In 1963, Tony spotted Sharon Skodack at the bowling alley where she was in a league with his younger sister, Ria. His pursuit of Sharon began and after a few short months, they knew they wanted to start a life together. Tony asked Sharon to marry him by Christmas. They committed themselves in marriage on May 23, 1964 and were devoted for the next 57 years. They raised five children together, and the family of seven was Tony’s greatest pride and joy. Tony and Sharon started a business together, Tony’s Quality Meats. Their five children spent much time at the family business, and still to this day, reminisce at the smell of meat being smoked. As large grocery chains emerged, Tony pivoted his career to Quality Control and later retired from Engine Power Components in Grand Haven. Tony’s positive energy and kind heart made him a friend to all who knew him. His blue eyes and sparkling smile would light up a room. He made everyone feel special with his individual and characteristic pet names. His treasured Sharon knew for every moment of the past 57 years just how much Tony loved and adored her, professing that love to her right up to his last hour. Their four sons and one daughter have enjoyed every day on this earth knowing how much they were loved by their dad. Tony created a lasting legacy: Nothing was ever more important than family. Tony loved the game of golf and was a scratch golfer in his younger years. This love became a weekly family outing, specifically on Sundays after church. Tony taught his children not only the technique of the game but also the etiquette resulting in strong character, which translated into their everyday lives. Tony and Sharon loved Michigan winters, frequently loading up their large family of seven into their Rupp snowmobile and sleigh. Tony also loved deer hunting season. It wasn’t necessarily the actual hunting he enjoyed, but rather, the experience of Deer Camp itself, and the sharing of stories from years past that continue to be told year after year through his sons and grandsons. As Tony knew the love of his heavenly father, he modeled that every day to his wife and children. He made known they were loved beyond measure and that family and faith and love and loyalty was what he most ardently cherished. This true patriarch leaves behind a legacy of unconditional love which surely earned him a “Well Done My Good & Faithful Servant.” Tony is survived by his beloved wife of 57 years Sharon (Skodack); his children: Anthony II (Jill) Lisman, Wendi (Bill) Cooper, Richard (Amy) Lisman, Theodore (Amy) Lisman and Scott (Kimberly) Lisman; sisters: Thea (Bud) Harrell, Ria (John, deceased) Maskell, and Johanna (David) Martin; grandchildren: Sarah (Jacob) Acker, Anthony “AJ” III, Zachary, Wyatt, and Dylan Lisman; Annie, Maggie, and Grace Cooper; RJ Lisman; Madalyn and Ethan Lisman; Maxwell and Ava Lisman. The Lisman family would like to give special thanks to Fresenius Kidney Care for the extra 11 years they gave us with our dad. Wendy Schaner was his angel on this side of heaven. A VISITATION for Tony will be taking place from 6:00 – 8:00 PM Wednesday, April 13, 2022. A MEMORIAL SERVICE will be held 3:00 PM Thursday, April 14, 2022 at The Lee Chapel of Sytsema Funeral and Cremation Services, 6291 S. Harvey St., Norton Shores, MI 49444 (231) 798-1100. In lieu of flowers, please consider a donation to the National Kidney Foundation or Bridge Bible Church. Share memories with the family at their online Guest Book at www.sytsemafh.com

Anthony John Lisman Sr., 85, of Norton Shores, Michigan, passed away on April 3, 2022 and is now with The Lord. Tony was born on September 28, 1936 to Theodore and Maria Lisman in Utrecht, Netherlands. There, his mother was a pharmacist, and... View Obituary & Service Information

The family of Anthony J. "Tony" Lisman Sr. created this Life Tributes page to make it easy to share your memories.

Send flowers to the Lisman family.