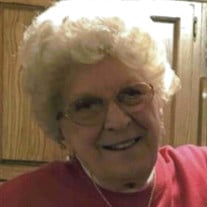 Mrs. Ardyce Mae “Ardie” Wierengo, age 89, passed away Saturday, August 28, 2021 in Muskegon. She was born in Muskegon on December 31, 1931 to John and Mayme (Carlson) VanDyke. Ardie graduated from Muskegon High School and was a life resident of the area. She was a member of the former Muskegon Moose Lodge where she regularly volunteered for the Friday night fish fry’s. Ardie served her chapter successfully during her term as senior regent and earned her green cap. She enjoyed knitting, trips to the casino, and shopping at thrift stores. On October 27, 1951, Ardie married Robert W. Wierengo in Muskegon and they would have celebrated 70 years of marriage in October. He survives her along with their children, Bob Wierengo and Debi (Mike) Repta; four grandchildren, Jill (Ryan) Trimbur, Kevin (Christina) Wierengo, John Repta, and Lesa (Justin) Kladder; three great-grandchildren, Justin, Blaine, and Malia; sister, Doris Isley and niece, Melissa (Steve) Spring; special niece, Diane Kieft; and several other nieces and nephews. She was preceded in death by her parents and brother, Kenneth VanDyke. According to Ardie’s wishes, cremation has taken place and no services will be held. MEMORIALS in her memory may be directed to the Harbor Hospice Foundation – Poppen Residence. You may sign her online guestbook at www.sytsemafh.com Arrangements by The Sytsema Chapel of Sytsema Funeral & Cremation Services, 737 E. Apple Ave., Muskegon, MI 49442.

The family of Ardyce Mae Wierengo created this Life Tributes page to make it easy to share your memories.

Send flowers to the Wierengo family.