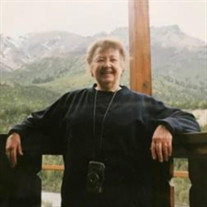 Barbara Jean Murphy, age 92, passed away in Muskegon on Saturday, January 22, 2022. Barbara was born in Grand Rapids, MI on November 9, 1929, to her parents Floyd and Betsy (Eaton) Eggleston. She moved to Muskegon in 1933, attended Muskegon Public Schools, and graduated in 1947. She went on to Muskegon Junior College for one year, then transferred to National College of Education (now National Louis University) in Evanston, Illinois, where she received a bachelor’s degree in Education in 1951 and master’s in Education in 1956. During her career she taught in Muskegon, Muskegon Heights, and Mona Shores Public Schools, retiring in 1991. Barbara enjoyed singing, crossword and sudoku puzzles, and playing the piano. She also loved supporting her son, Rich, with his figure skating. She was a member of the Lansing Skating Club and she designed and made outfits for Rich and his skating partners. Barbara was a talented member of the PALS Quilt Guild, and she has a quilt on display in the Michigan State University Museum in Lansing. Barbara will be lovingly remembered by her son: Richard (Maureen McKenzie) Murphy; niece: Bette Eggleston; grandnephew: Donald (Cammie) Anderson; grandniece, Rebecca (Michael) Dickerson; and four great-grandnieces/nephews. She was preceded in death by her parents; brother, Donald (Norine) Eggleston; and Niece: Carol (Frank) Anderson. A FUNERAL will take place for Barbara at 11:00 AM on Friday, January 28 at The Walburn Chapel of Sytsema Funeral & Cremation Services (1547 W. Sherman Blvd., Muskegon, MI 49441). A VISITATION will take place from 5:00-7:00 PM on Thursday, January 27, as well as an hour prior to the funeral service. In lieu of flowers, donations in Barbara’s memory can be made out to Viking Lodge #57 Scholarship Fund or the West Shore Symphony Orchestra. Please sign the family’s online guestbook at sytsemafh.com

Barbara Jean Murphy, age 92, passed away in Muskegon on Saturday, January 22, 2022. Barbara was born in Grand Rapids, MI on November 9, 1929, to her parents Floyd and Betsy (Eaton) Eggleston. She moved to Muskegon in 1933, attended Muskegon... View Obituary & Service Information

The family of Barbara J. Murphy created this Life Tributes page to make it easy to share your memories.

Barbara Jean Murphy, age 92, passed away in Muskegon on Saturday,...

Send flowers to the Murphy family.