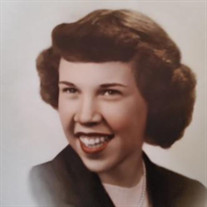 Mrs. Bernice F. “Fern” Doctor, 90, passed away early Monday morning, October 11, 2021, in Muskegon. She was born February 13, 1931, to Glenn H. and Diana M. (Tripp) Dulyea in Muskegon and lived all of her life in the greater Muskegon area. Fern worked for the Reeths Puffer Public Schools for 15 years, retiring in 1985. She had been a member of First Christian Church for most of her life. Fern loved music and sang in the church choir as well as played organ at both First Christian Church and Evergreen Village. She enjoyed being a snowbird, and went to Texas for many years with her husband, Don Doctor. On April 13, 1985, she married Donald F. Doctor and he preceded her in death on April 25, 2008. Survivors include 4 children, Susan J. (David) Wright, Kathleen M. (Jeff) Joslyn, Gregg L. (Debra) Rollenhagen, Scott D. Rollenhagen; many grandchildren and great grandchildren, nieces and nephews. She was also preceded in death by her parents, 2 sisters, Maxine Niemeyer and Natalie Brouhard, and 3 brothers, K. Wayne Dulyea, Ralph Dulyea and Harold Dulyea who died while serving in Korea. A graveside service will be held Monday, October 18, at 11:00 AM at Sunrise Memorial Gardens. Contributions in memory of Mrs. Doctor may be made to The Wounded Warrior Project. Arrangements have been entrusted to The Sytsema Chapel of Sytsema Funeral and Cremation Services, 737 E. Apple Ave., Muskegon, MI 49442.

The family of Mrs. Bernice "Fern" Doctor created this Life Tributes page to make it easy to share your memories.

Send flowers to the Doctor family.