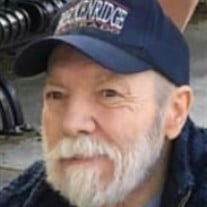 Bruce W. Gilbert, age 69, passed away Monday, September 6, 2021 peacefully at home. He was born November 27, 1951 in Muskegon to Clement and Edna (Kampenga) Gilbert and had been a life resident of the area. Bruce was a 1970 graduate of Mona Shores High School and went on to earn his bachelor’s in business administration from Western State College of Colorado. On August 3, 1979, he married the former Linda A. Steinbauer in Muskegon. He worked for Daniel’s Office Supply for many years as a salesman and later became a licensed insurance agent for Waterstone Insurance Agency prior to his retirement in 2005. In his earlier years, Bruce loved to golf, snow ski, and play hockey. He also enjoyed watching sports, riding his Harley-Davidson, and spending time at their cottage on North Lake. But most importantly, he loved spending time with family and friends. Bruce was outgoing and had a larger-than-life personality, which made great qualities for a salesman. He will be missed by many. He is survived by his wife of 42 years, Linda; son, Brett (Jera) Gilbert of N. Muskegon; 2 grandchildren: Marlowe and Elinore “Leni”; sister, Sharie (Steve) Lee of Fort Lauderdale, FL; sister-in-law, Lisa Kohl of Grand Rapids; 3 nieces: Stephanie Fischer, Angie Brown, and Jamie Pyka; and a nephew, David Swinson. He was preceded in death by his parents and a sister, Jackie Pyka. A celebration of Bruce’s life will be held at a later date. MEMORIALS to the Muskegon Rescue Mission or Mission for Area People will be appreciated. Share memories with the family at their online Guest Book at www.sytsemafh.com Arrangements by The Lee Chapel of Sytsema Funeral and Cremation Services, 6291 S. Harvey St., Norton Shores, MI 49444 (231) 798-1100

Bruce W. Gilbert, age 69, passed away Monday, September 6, 2021 peacefully at home. He was born November 27, 1951 in Muskegon to Clement and Edna (Kampenga) Gilbert and had been a life resident of the area. Bruce was a 1970 graduate of Mona... View Obituary & Service Information

The family of Bruce W. Gilbert created this Life Tributes page to make it easy to share your memories.

Send flowers to the Gilbert family.