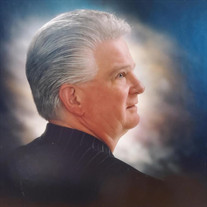 Bryan L. McClain, age 76, passed away Friday, October 15, 2021. He was born on November 3, 1944 in Ravenna, MI to Willis and Barbara (Anderson) McClain and resided in the West Michigan area all of his life. Bryan was a Veteran of the U.S. Air... View Obituary & Service Information

The family of Bryan L. McClain created this Life Tributes page to make it easy to share your memories.

Send flowers to the McClain family.