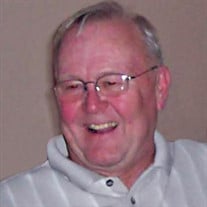 After a life well-lived, Carlton “Gus” Gustin died on Tuesday, September 14, 2021 at the age of 85. Gus was born in Muskegon and graduated from Muskegon High School. After graduation, he enlisted in the Army and spent two years stationed in Hawaii. He returned to Muskegon and married Judy Morse in1963. They had three children, Amy (Larry Earle), Jeffrey (Paula), and Christopher. With his logistics training in the Army and classes at Muskegon Business College, Gus managed the shipping department at Norge/Fedders until it closed. He then moved on to Breneman-Hartshorn, Inc. and Bastian-Blessing in Grand Haven. When those two companies closed, he started his own trucking company - Special Goods Transporation. He ended his long career in the shipping/transportation industry at Structural Concepts where he was known as the Gatorade man. Gus and Judy had a wide circle of friends and always had a house full of people. It was a given that almost any day of the week you could find the families of David (Gus’ younger brother) and Vicki, Ed and Gloria, Corky and MaryDale, Verne and Doris, and many, many others laughing and enjoying a beverage by the pool or around the table. It was with these great friends that Gus and Judy went to Michigan State football games, weekend ski trips up north, and travelled around the country. After Judy died in 1995, Gus met Janet Burkhardt and they married in 1997. Jan brought with her another fun group of friends - Patty, Carol, Mike, Gary, Stew, and Carla to name a few. Gus was a past member of the American Legion, Mona Lake Boat Club, and Vikings. He was also a Gold member of the Lakeside Veterans Club. A visitation will take place from 5:00-7:00 pm on Tuesday, September 21 at The Walburn Chapel of Sytsema Funeral & Cremation Services, 1547 W Sherman Blvd, Muskegon, MI 4944, followed by, fittingly, a gathering at the house. In lieu of flowers, Gus requested donations be made to the Lakeside Veterans Club. Sign the online guestbook at www.sytsemafh.com

After a life well-lived, Carlton &#8220;Gus&#8221; Gustin died on Tuesday, September 14, 2021 at the age of 85. Gus was born in Muskegon and graduated from Muskegon High School. After graduation, he enlisted in the Army and spent two years stationed... View Obituary & Service Information

The family of Carlton Gus Gustin created this Life Tributes page to make it easy to share your memories.

After a life well-lived, Carlton “Gus” Gustin died on Tuesday,...

Send flowers to the Gustin family.