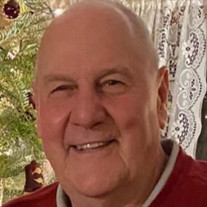 Mr. Charles LeRoy Shaffer, age 82, passed away peacefully on Saturday, December 25, 2021 at his home. He was born on October 25, 1939 to Charles and Martha (Helms) Shaffer in Anderson, Indiana. Chuck joined the United States Marines after graduation and proudly served from 1957-1960. He married the former Nora L. Sylvester on December 27, 1959 in Indiana and she survives him. Chuck and Nora started their family of four children and later moved to Ohio. After retiring at the age of 55, Chuck and Nora moved to West Michigan, which always had a special place in Chuck’s heart. He spent his summers growing up at Stony Lake and continued the tradition while his children were young. He enjoyed boating, spending time on the water, being outdoors, and watching NCAA basketball, especially the IU Hoosiers. He loved playing golf and stayed busy in retirement working at Bent Pine Golf Club. Most importantly, was the time Chuck was able to spend with his grandchildren. He loved being able to attend their various sporting event and school functions. Chuck will be remembered by his wife of nearly 62 years, Nora; children, Scott (Kelly) Shaffer, Shelley (William) Kelley, Stacy (Nik) Tong, and Shari (Brad) Ralston; grandchildren, Kelsey (Jeff) Helstowski, Elise (Alex) Van De Steenoven, Mackenzie and Morgan Ralston, and Brandon and Brooke Tong; two great-grandchildren, Kinsley and Anistyn; a niece and nephew and many close friends. He was preceded in death by his parents, and sister, Norma Kurtz. Per Chuck’s wishes, no services will be held at this time. Arrangements by The Lee Chapel of Sytsema Funeral & Cremation Services, 6291 S. Harvey St., Norton Shores, MI 49444. Please feel free to share a memory with the family online at www.sytsemafh.com.

Mr. Charles LeRoy Shaffer, age 82, passed away peacefully on Saturday, December 25, 2021 at his home. He was born on October 25, 1939 to Charles and Martha (Helms) Shaffer in Anderson, Indiana. Chuck joined the United States Marines after graduation... View Obituary & Service Information

The family of Charles L. Shaffer created this Life Tributes page to make it easy to share your memories.

Send flowers to the Shaffer family.