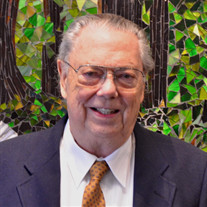 Charlie Wise was 89 when he passed away at his home November 21, 2021. His battle with End Stage Kidney Disease showed his courage in handling the things in life that are great challenges. He modeled this same courage with other difficult times especially the passing of his son, Brian Colin Wise, age 19, in 1987 and his wife, Margaret Ann Wise, in 2008. Daughters, Brenda Wise Boersema of Norton Shores and Cindy Wise Johengen of Ann Arbor, enjoyed all the things Charlie made for them growing up. One favorite was the giant geodesic dome he made for them to play in, which was best during sunny days in February. Another inventive creation was his pop-up camper custom fit to the tailgate of the family’s beloved ’65 Chevy wagon. Made from plywood and aluminum, it weighed 125 pounds and cost about $80 to build in 1970. Throughout the years, Charlie also sculpted with wood and clay and was masterful with the metal lathe in his workshop. He created and sold miniature steam engines and an intricate, miniature working cannon, every piece carefully measured and crafted on the lathe. He built furniture, a screened-in porch on the back of the house and fixed absolutely everything. No one ever saw a commercial plumber or fix-it person at the house. Later as grandchildren arrived, he built wooden toys for them to pull, spin, bounce and enjoy. All of his children and grandchildren enjoyed and marveled at the many great things Charlie made by hand. Brenda’s daughters include Maggie Boersema Humason, husband Scott, and children Anna and Luke; twin sister Kelsey Boersema Van Oss, husband Tanner, and children, Lydia and Silas; and Elise Boersema is engaged to Dave Smithern. Cindy’s family includes her husband, Tom Johengen, and their sons Dr. Jake Johengen with wife, Emily, and Jess Johengen. There were many years that Charlie pursued another passion: riding his Honda Gold Wing Motorcycle along the backroads. He and Margaret often rode long distances stopping at places for his nature photography, which Margaret used as inspiration for her paintings. Charlie later met Helen Lutz Innis, and they had many happy years together. Charlie loved his neighbors and was equally loved in return. Their friendship meant so much to him throughout his more than 50 years on the “circle”, Crestwood Lane. Charlie requested no formal services after his death citing that he has been given much by everyone’s love and friendship over the years, and “they didn’t have to do anything more for him”. He wanted them to remain safe with their loved ones during the Thanksgiving Holidays. He will be interred at Sunrise Memorial Gardens with Margaret and Brian at a future time and date. Friends wishing to join the family are most welcome and will be notified. Arrangements entrusted to The Sytsema Chapel of Sytsema Funeral & Cremation Services, 737 Apple Avenue, Muskegon, MI 49442.

Charlie Wise was 89 when he passed away at his home November 21, 2021. His battle with End Stage Kidney Disease showed his courage in handling the things in life that are great challenges. He modeled this same courage with other difficult times... View Obituary & Service Information

The family of Charlie Wise created this Life Tributes page to make it easy to share your memories.

Charlie Wise was 89 when he passed away at his home November...

Send flowers to the Wise family.