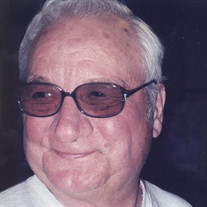 Clarence Irving VanMunster, age 91, passed away on December 29, 2021, in Muskegon, MI. He was born on February 27, 1930, in Muskegon to his parents, Herman and Gesena (Hovenga) VanMunster. Clarence was proud to serve in the United States Army and remained a proud patriot for the rest of his life. On February 14, 1950, he married the former Pauline Quinn, and they spent many happy years together before she preceded him in death on September 20, 1999. Clarence worked as a machine operator at Continental Motors for 40 years before retiring in 1991. His hobbies included travelling to the Upper Peninsula, fishing, riding his bike, watching Detroit Tigers baseball, and playing games. In his later years he enjoyed spending time at Lake Michigan, but his favorite pastime was always spending time with his family. Clarence will be lovingly remembered by his five children: Jeanne Boyko, Danny (Jeanne) VanMunster, Gary (Kathy) VanMunster, Debra (William) Gray, and Tammy (Brian) Page; 10 grandchildren; 15 great-grandchildren; 2 great-great-grandchildren; and his brother, Don (Donna) VanMunster. Clarence was preceded in death by his parents and his wife; five siblings: Hank, Herman, Raymond “Whitey”, Marion, and Betty; and daughter in-law, Linda. FUNERAL will take place on Friday, January 7, 2022, at 1:00 PM at Living Word Muskegon (1551 Wood St, Muskegon, MI 49442), with a visitation taking place an hour prior. In lieu of flowers, donations in memory of Clarence can be made out to The Wounded Warrior Project. Arrangements by The Sytsema Chapel of Sytsema Funeral & Cremation Services, 737 E. Apple Ave, Muskegon, MI 49442. Please sign the family’s online guestbook at sytsemafh.com.

Clarence Irving VanMunster, age 91, passed away on December 29, 2021, in Muskegon, MI. He was born on February 27, 1930, in Muskegon to his parents, Herman and Gesena (Hovenga) VanMunster. Clarence was proud to serve in the United States Army... View Obituary & Service Information

The family of Clarence Irving VanMunster created this Life Tributes page to make it easy to share your memories.

Send flowers to the VanMunster family.