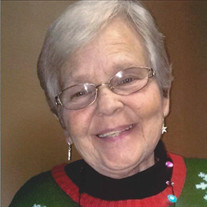 Constance “Connie” Faye VanNett, age 77, passed away on Friday, February 4, 2022. She was born in Muskegon on December 13, 1944, to her parents Richard and Pauline (Bringedahl) Poort. Connie graduated from Muskegon Heights High School in 1963, and she remained in the Muskegon area for the rest of her life. On July 16, 1966, she married Raymond VanNett, and they lived happily together for 56 years. Connie was a proud homemaker who loved to spend time with her family. Connie loved to go camping and having big parties with family. She enjoyed crossword puzzles, watching television gameshows, and eating Lee’s Famous Recipe Chicken. Connie liked listening to music and dancing, and she was a fan of the Detroit Lions and Tigers. She will be lovingly remembered by her husband: Raymond VanNett; three daughters: Valarie (Wendell) King, Kimberly (Michael) Lynch, and Julie (Josh) O’Neal; eight grandchildren: Duane, Ashley, Courtney, Bailey, Kallie, Sierra, Hunter, and Tanner; eight great-grandchildren: Rylee, Clay, Adalynn, Ryder, Aurora, Avery, Kinsley, and Holden; and two brothers, Jim (Kathy) Poort and Scott (Betty) Poort. Connie was preceded in death by her parents; sister, Janet; and two brothers: Ron and Dickie. A CELEBRATION OF LIFE will be taking place for Connie in the spring. In lieu of flowers, donations in Connie’s memory can be made out to Pound Buddies Animal Shelter & Adoption Center (https://poundbuddies.org/donate-2).Arrangements by The Walburn Chapel of Sytsema Funeral & Cremation Services, 1547 W. Sherman Blvd., Muskegon, MI, 49441.

The family of Constance F. VanNett created this Life Tributes page to make it easy to share your memories.

Send flowers to the VanNett family.