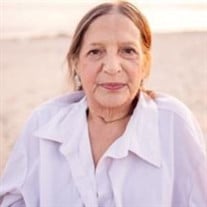 Cynthia Diane Kendall, age 68, transitioned to her eternal home on September 27, 2021. Cindy was surrounded by her children and treasured friends after a brief stay in Harbor Hospice’s Poppen House. Cindy was born in Muskegon on August 7, 1953 to Edward Kendall and Beverly (Munson) Kendall when Bev’s water broke while picking berries in the family's blueberry patch. She was a 1971 graduate of Reeths-Puffer High School where she was a member of the choir. Cindy attended Muskegon Community College, Grand Valley State University and later the Culinary Institute of Michigan. While she lived most of her life in Muskegon, she moved to Anchorage, Alaska in 1986 to work at a radio station. While living there she met and married Edward P. Young. Together they had two children, Kathryn and Edward. They ultimately divorced and she returned to Muskegon with her children and was able to raise them surrounded by the care and support of her mother, Bev. She also had the support of her best friend, Felicia, and was able to raise Kaite and Eddie alongside Felicia’s children, Jayson, Ephron, Felicia, David and Alvin. Cindy also loved raising her children in community with other cherished friends and a large, loud, extended family. Cindy was always invested in the Muskegon community working for organizations such as Head Start, The ARC, Catholic Social Charities, Pioneer Resources and Community EnCompass. She also thoroughly enjoyed serving the community with her culinary arts skills. She was owner of Cindy’s Cove Ice Cream Shop in Fricano's Place and manager of the Coast Line Deli in Terrace Plaza. One of her favorite jobs was on the Port City Princess where she was their summer chef cruising Muskegon Lake and Lake Michigan during sunset. She also served in her congregation, Bethany Christian Reformed Church, as a cook making meals for their Twice Fed program. Cindy was enthusiastically involved with the Democratic National Party attending many conferences throughout her years. She helped manage, run, and support numerous local and state campaigns with canvassing, phone banking, monetary donations, making calls, writing letters and more! Cindy truly had a passion to serve the world around her. If you know her, it’s likely that she’s fed you at some point, food, advice, or both. Along with combating the issue of food insecurity, Cindy was an advocate for many social justice issues. She was concerned about housing insecurity, access to affordable early childhood education, activism related to disability rights and encouraging civic engagement. She was a tremendously kind, generous, resourceful and wildly stubborn person who included everyone as often as she could. She had big dreams for herself, her family, her community and the world. One of Cindy’s prayers throughout her life was to be able to raise her children into adulthood. She was an incredibly proud hockey mom of Eddie, cheering him on with her famous cow bell and bragging to everyone of his talent, humor and zest for life. She was also genuinely proud of her daughter, Kaite, for attending both Central Michigan University and Eastern Michigan University, and would brag about her travel, wonderful husband, Tim, and her compassion for others. Cindy was preceded in death by her father, Edward Kendall, mother, Beverly Kendall, sister, Luann Wierda, brother Bruce Kendall, Earl and Jason McCrary, and a very naughty (but adored) Jack Rusell Terrier, Casey. She is survived by her children Kathryn (Timothy) Scott and Edward (Amanda Church) Young, brothers Edward (Cynthia) Kendall and James Kendall. Her many beloved nieces and nephews, Melissa (Michael) Closz, Jennifer (Joseph) Guerne, Kurt Wierda, Elizabeth (Nic) Miller, Kyle (Abbey Murphy) Wierda, Ronald (Lindsey Clark) Kendall, Thomas (Emily) Kendall, Joseph Riley, Nathan Riley, Joshua (Holly) Riley, Robert Miller, Laura (Collin) DeHaan, Nichole (Jacob) Kendall and Michael Kendall. She also had the pleasure of being a great-aunt to Jacob and April Bowlin, Finnegan and Benjamin Closz, William and Dean Guerne, Alexander Miller, Vivienne DeHaan, Hayley Kendall and Everly Kendall. She is also survived by her precious dog, Roxie, now in the care of a special friend, Hannah Hilborn and family. She is also survived by treasured friends, Felicia Bright and children Ephron, Felicia, David and Alvin, Mary Salter, Kim Mahoney and Phillip Johnson. In lieu of flowers, memorial contributions can be made to Bethany Christian Reformed Church’s Food Serving Programs. An additional way that you can honor Cindy’s life is by registering to vote and participating in both local and national elections, as well as, upholding the 1964 Voting Rights Act. When asked by her Pastor Tara if she had any advice for life, she simply shared “don’t wait”. One last way to honor Cindy is to live into your values, dreams and hopes and don’t wait to pursue your path. Kaite and Eddie would like to thank the staff of Jefferson Towers, Senior Resources, Mercy Hospital, Michigan Medicine, Visiting Nurse Service, Sanctuary at McAuley and Harbor Hospice Poppen House for their compassionate care and patience during Cindy’s illness. We would also like to thank the Bethany Church community for wrapping Cindy in love and prayers during this season of her life. A service to celebrate and remember Cynthia’s life will be held Saturday, October 2, at 11:00 am at Bethany Christian Reformed Church, 1105 Terrace St., Muskegon, 49442. Visitation will be one hour prior to the service. Arrangements have been entrusted to The Sytsema Chapel of Sytsema Funeral and Cremation Services, 737 E. Apple Ave., Muskegon, MI 49442.

Cynthia Diane Kendall, age 68, transitioned to her eternal home on September 27, 2021. Cindy was surrounded by her children and treasured friends after a brief stay in Harbor Hospice&#8217;s Poppen House. Cindy was born in Muskegon on August... View Obituary & Service Information

The family of Cynthia D. Kendall created this Life Tributes page to make it easy to share your memories.

Send flowers to the Kendall family.