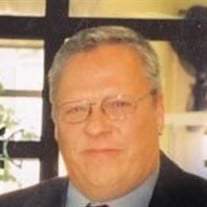 Dale R. Johnson, age 77, met his Lord and Savior Tuesday, November 16, 2021. He was born on September 13, 1944 to Robert and Frances (Johnson) Johnson in Muskegon, MI. He was a proud veteran, serving his country in the U.S. Army during the Vietnam War. He received a bachelor’s degree in Music Education from Northern Illinois University. Dale used his early achievements in both the armed forces and musical degree to obtain a career working as a musical instrument repair technician. He worked in various parts of the world, but dedicated 13 years working in Germany for the Department of Defense Dependent Schools’ before retiring in 2006. On August 27, 2004 he married, Irma Gaërtner in Germany. Together they cherished 17 years full of love, laughter and many adventures. He was a servant of his Lord and attended Central United Methodist Church in Muskegon. Dale was a man of many hobbies, he enjoyed taking out his motorcycle for a ride and listening to his music. He has a passion for all types of music and was a skilled musician. He had the talent of being able to play almost all instruments but was well versed with the bassoon and saxophone, playing in many bands and orchestras throughout his life. Dale was able to use his passion and love of music to impact the lives of many. He could make a connection with just about anyone. He was an epicurean and appreciated all life had to offer. His easy going and loving personality will be missed by all who knew him. He is survived by his loving wife, Irma Johnson; 2 children, Kirsten Johnson and Jared Johnson; stepson, Micro (Alexandra) Gaërtner; 4 grandchildren, Dylan, Jack, Hannah and Lars; 2 sisters, Marilyn Wikman and Barbara Seagren; and dear friends. He is preceded in death by his parents; mother of his children, Lindsay Hazen; and loving pup, Hannah. A Celebration of Dale’s Life will be held at 1:00 PM on Tuesday, November 23, 2021 at the Central United Methodist Church, 1011 2nd Street, Muskegon, MI 49440. A visitation will be held from 12-1:00 PM at the church. Arrangements entrusted to The Lee Chapel of Sytsema Funeral & Cremation Services, 6291 S. Harvey St., Norton Shores, MI 49444. Share memories with the family at www.sytsemafh.com.

Dale R. Johnson, age 77, met his Lord and Savior Tuesday, November 16, 2021. He was born on September 13, 1944 to Robert and Frances (Johnson) Johnson in Muskegon, MI. He was a proud veteran, serving his country in the U.S. Army during the... View Obituary & Service Information

The family of Dale R. Johnson created this Life Tributes page to make it easy to share your memories.