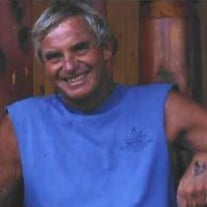 Daniel R. Parker, age 71, of Montague, MI passed away on May 7, 2022 after a brief battle with cancer. He was born August 15, 1950, to Eugene and Mabel (Schultz) Parker in Muskegon, MI. He graduated from Montague High School in 1968 and later graduated from Grand Valley State College with a Bachelor of Science in History in 1974. He went on to work jobs in education, as a high school history teacher, and later in business form sales. Following a grass-roots effort to preserve a large tract of wetlands in Spring Lake, MI he discovered his true passion of environmental conservation. He then merged his education and sales experience to lead an Adopt-A-Stream program through Spring Lake and Grand Haven Community Education that implemented various conservation efforts throughout west Michigan that were funded by local businesses. Ever the entrepreneur, in 2001, he worked with his nephew, Tim Parker, to arrange a benefit concert for the Adopt-A-Stream program by legendary musician Richie Havens in Grand Haven, MI. Even after retirement, he assisted with an effort to add two acres of critical dune habitat to the Barrier Dunes Sanctuary in White River Township, MI, which he was particularly proud of. He enjoyed any activity that involved being outdoors ranging from cross-country skiing, fishing, gardening, golfing, yard work, and his daily, five-mile walks. He also enjoyed reading books and socializing with friends and family. He is survived by his son, Aaron (Pamela) Parker; granddaughters: Mari and Primrose; former wife, Helen; sister, Joy (Frank) Lehman; brothers: David (Nancy) and Nick (Nancy) Parker; and numerous nieces, nephews, and cousins. He was preceded in death by his parents and his beloved adopted dog, Willie. The family would like to express their gratitude to the staff at Mercy Hospital, in Muskegon, for their care and compassion for Dan during his final weeks. A celebration of life gathering will be held at the Montague Township Hall, 8915 Whitbeck Rd., Montague, MI 49437 on Saturday, June 4, 2022 from 11 A.M. to 2 P.M. In lieu of flowers, the family encourages donations be made to The Land Conservancy of West Michigan in Dan’s memory: https://naturenearby.org/get-involved/donate/

Daniel R. Parker, age 71, of Montague, MI passed away on May 7, 2022 after a brief battle with cancer. He was born August 15, 1950, to Eugene and Mabel (Schultz) Parker in Muskegon, MI. He graduated from Montague High School in 1968 and later... View Obituary & Service Information

The family of Daniel R. Parker created this Life Tributes page to make it easy to share your memories.