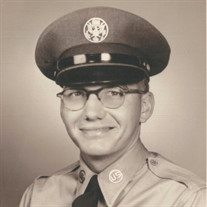 David Diller was born to Frank and Iva Diller 6-23-35 in Flint, MI. He grew up in Otter Lake, MI helping with the family farm. He is predeceased by his parents, three brothers and one sister, Franklin Diller (Dottie), Bill Diller (Lida), Paul Diller (Pat), and Ilene Greening. After high school in October 1952, he joined the Air Force, 1607th Field Maintenance Squadron for four years, then spent four years in the reserves. He received a National Defense Service Medal and has always been a strong patriot. David started a business siding houses and painting which he continued for a few years after he was hired into General Motors Fisher Body Division. He used his Air Force experience working on lift trucks and industrial hydraulics. He retired from General Motors Cadillac Motor Car Division in 1987. August 31, 1957, he married Norma J. Bentley and in 1959 they moved to their home in Flushing, MI with their first born. The four children, Janice, Julia, Jeanene, and Stephen grew up in Flushing and after David retired, he and Norma moved to Muskegon, MI to be near some family and enjoy the lake. He and Norma built their home there (with the help of their children) and enjoyed visits from kids and grandchildren and many Christmas parties with family. Norma predeceased him in 2013. David loved to build – he built an addition to their home in Flushing, the cabin in Harrison and the home in Muskegon – the language was always colorful & it was hard work, but he had a lot of pride in the end products. He also really enjoyed hunting, camping, snowmobiling, gardening (especially the strawberries and corn!), and old cars. A private memorial service will be taking place for David at a later date. In lieu of flowers, donations in David’s memory can be made out to Elara Caring Hospice. Arrangements entrusted to The Sytsema Chapel of Sytsema Funeral & Cremation Services, 737 E Apple Ave, Muskegon, MI 49442

David Diller was born to Frank and Iva Diller 6-23-35 in Flint, MI. He grew up in Otter Lake, MI helping with the family farm. He is predeceased by his parents, three brothers and one sister, Franklin Diller (Dottie), Bill Diller (Lida), Paul... View Obituary & Service Information

The family of David J. Diller created this Life Tributes page to make it easy to share your memories.

Send flowers to the Diller family.