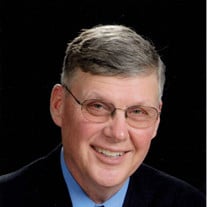 David Lee Janusiewicz, 72, passed away peacefully surrounded by family on December 11, 2021, at the Poppen Hospice Residence, in Muskegon, after battling dementia. David was born June 19, 1949, to Chester “Chet” and Ardis C. (Petyans) Janusiewicz in Muskegon and was a lifelong resident. David met his best friend and love of his life, Mary Ann Olson in Kindergarten. They were married on June 19, 1971 and enjoyed 50 years of marriage together. David graduated from North Muskegon High School in 1967 and was a standout on the football field for the Norsemen. After graduation, he earned a bachelor's degree in education from Western Michigan University and a master's degree from Central Michigan University. Following college, David proudly spent his entire 32 year teaching and coaching career at Orchard View Schools before retiring in 2003. In the Orchard View community, he is known as "Mr. J" a caring teacher, coach, and friend who positively impacted thousands of students. David was a longtime member of St. Thomas the Apostle Catholic Church and a member of the Knights of Columbus where he served a term as Grand Knight. In his younger days, David spent 12 summers as a player and coach for the Muskegon Bears semi-pro football team. He was also a lifetime member of the Muskegon Bowmen’s Club. David enjoyed traveling, hunting and fishing with his family and friends. But, he was most happy when he was in a gym or on a field coaching or watching his children and granddaughter participate in athletics. He is survived by Mary Ann along with their two children: Jennifer (Bryan) Fethke and Jason Janusiewicz; granddaughter, Allyson Fethke; brother, Paul Janusiewicz; sister, Janis Allard; Sister-in-law, Patti (Bob) Centner; 6 nieces and nephews, Elisabeth Janusiewicz, Michelle (Jim) Johnson, Maren (Mike) Bronkema, Casey (Casey) Centner, Tyler (Alyssa) Janusiewicz and Andrew Janusiewicz; many extended family members, his Orchard View family and friends. David was preceded in death by his parents; brother, Joseph Janusiewicz; brother-in-law, Richard Allard; mother-in-law and father-in-law, Mary and Paul Olson. Due to the recent COVID outbreak, the family will be holding a small private service for David, with plans to have a celebration of his life this coming summer. Contributions in David’s memory may be made to the Knights of Columus - Father’s Rudy and Clem Council # 13035, the Orchard View Education Foundation, or the Leila and Cyrus Poppen Residence through the Harbor Hospice Foundation. Arrangements have been entrusted to The Sytsema Chapel of Sytsema Funeral and Cremation Services, 737 E. Apple Ave., Muskegon, MI 49442.

The family of Mr. David L. Janusiewicz created this Life Tributes page to make it easy to share your memories.

Send flowers to the Janusiewicz family.