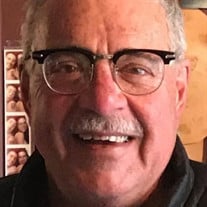 Mr. John Dickinson (Dick) Baker, age 74, of Grand Haven passed away Monday, January 24, 2022, at home. He was born June 16, 1947, in Grand Haven to Douglas and Katharine (Hall) Baker. Dick married Cindy Casey, August 28, 1971, at St. Mary’s Catholic Church in Spring Lake after a serendipitous meeting at the Bil Mar just eight months earlier. Later they went on to create a family that would bring him the most beautiful and joyful purpose in life. He adored his wife, daughters and grandchildren to no end. Dick was in the first graduating class of Spring Lake High School and went on to be one of the first inductees of their sports hall of Fame. He also graduated from UNC Chapel Hill and took great pride in being a Tar Heel. Dick enjoyed golfing, basketball, swimming in the Big Lake, bird watching, big band, reading and any little thing that brought him joy- which was most things. He was a goofball and a prankster, he loved fun. He could be heard down the block hollering at the Detroit Lions or the Pistons; He never missed a game. Dick had no patience for traffic and got around mostly by bike. When faced with travel in the car, he always found the red roads, the scenic route to travel- a lesson we cherish both figuratively and literally. He wrote countless “bird notes” to family and friends and would stop at nothing to support them and enjoy life with all of us that were lucky enough to have known him. He was the most genuine, caring husband, father, "Bumpa" and friend anyone could ever have. He found essential value in every person he met and treated all with the same respect and dignity. Dick worked until his dying day at D Baker and Son Lumber Co. He did the jobs no one else could or wanted to, meticulously and with great care. He was humble, helpful and truly kind. He is survived by his wife of 50 years, Cindy; four daughters: Melissa (Jim) Baker-Boosamra of Grand Rapids, Allison (Mike) Anderson of Spring Lake, Nada (Ryan) Edson of Grand Haven, Sarah (Doug) Edgar of Grand Haven; thirteen grandchildren: Jharid, Chloe, Asa, and Ocean Boosamra, Avery, and Brenden Anderson, Kloe, Grant and Casey Edson, and Edith, James, Mary, and Louise Edgar; sisters, Ginny (Larry) McFadden, and Rachel Calderon; brother, Bruce (Christine) Baker; in-laws: John Casey, Tory (Joe) Thrift, and Sarah Palmer and many nieces, nephews, cousins, friends, and co-workers. He was preceded in death by his parents, Doug and Kathy Baker, in-laws, Colonel Edward J. and Nada (Dreier) Casey; and his brothers-in-law, Larry Palmer and Walter Foote. A memorial service will be held at 11:00am on Saturday, February 5th at First Presbyterian Church in Grand Haven. A celebration will follow immediately after the service at D Baker and Son Lumber. Interment will take place in Lake Forest Cemetery. Memorial contributions in memory of Dick may be given to Hemlock Crossings at Ottawa County Parks & Recreation or Doug and Kathy Baker Memorial Fund at the Grand Haven Area Community Foundation. Please sign the family’s online guestbook at www.sytsemafh.com.

The family of Dick Baker created this Life Tributes page to make it easy to share your memories.

Send flowers to the Baker family.