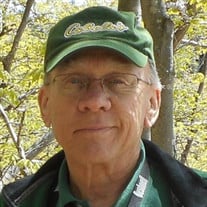 On Sunday, August 15, 2021, Don Petersen, beloved brother of four surviving siblings, went to heaven at age 76. Don Petersen was born in Chicago, Illinois, on April 11, 1945. From there, he moved to Holland, Iowa; Platte, South Dakota; and Sumas, Washington. In 1965, he joined the Navy. Upon his honorable discharge four years later, he earned his Bachelor’s degree in biology. He went on to earn a Master’s, also in biology but with a focus on ornithology, from Western Washington University. After that, he taught several years at Zuni Elementary School in New Mexico. Following his time in Zuni, Don spent many years working at Edaleen Dairy in Lynden, Washington, just a few miles from Sumas. During his years in Lynden, Don was part of a church just across the U.S.-Canadian border in Abbotsford, where he served as a much-appreciated adult Sunday-school teacher. In 1991, following the death of his father, Don moved to Grand Haven, Michigan, to take care of his elderly mother, who passed away in 1999. He then took in his mentally handicapped sister, Shirley, who had previously spent most of her life in group homes in various locations. In addition to looking after Shirley, Don worked as a park naturalist at P.J. Hoffmaster State Park in Norton Shores, just a few miles from Grand Haven. Don was a man who loved the Lord and loved teaching other believers about Him. Wherever he lived, he was an adult Sunday-school teacher, a small-group leader, or both. He also loved the outdoors, including extended birdwatching; working as a park naturalist for nearly 20 years was the ideal job for him. Don was an uncle to many nieces and nephews, as well as being like a grandpa to several of the younger nieces and nephews who never got to know their grandpa Henry Petersen. Don was preceded in death by his father, Henry, his mother, Irene, and his brother Dale, as well as his sisters Shirley and Sharon. He is survived by his brothers Karl, Ken, and Keith, as well as his sister Nancy. He is also survived by 19 nieces and nephews as well as many cousins. Don’s siblings will hold a virtual memorial service at a time to be determined. Donations may be given to The Luke Society at https://www.lukesociety.org/get-involved/donations/ Or you can send donations to them at 3409 S. Gateway Blvd #1000, Sioux Falls, SD 57106. Arrangements entrusted to The VanZantwick Chapel of Sytsema Funeral & Cremation Services, 620 Washington Ave., Grand Haven, MI 49417. Share memories with the family at their online guest book at www.sytsemafh.com.

On Sunday, August 15, 2021, Don Petersen, beloved brother of four surviving siblings, went to heaven at age 76. Don Petersen was born in Chicago, Illinois, on April 11, 1945. From there, he moved to Holland, Iowa; Platte, South Dakota; and... View Obituary & Service Information

The family of Donald "Don" Petersen created this Life Tributes page to make it easy to share your memories.

Send flowers to the Petersen family.