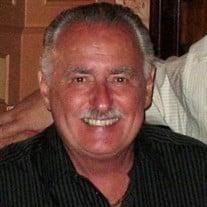 Mr. Donald D. Sanborn, age 83, of Norton Shores, MI. passed away Monday, September 13, 2021, at home with his family by his side. He was born August 31, 1938, in Chicago, IL. to Dean and Catherine (Felvey) Sanborn. Don served as a Light Weapons Infantryman holding the rank of a Corporal in the Michigan National Guard from 1957 – 1964. Don was a second-generation jeweler and a former owner of Sanborn’s Jewelers, where he was blessed to work alongside his family for many years and to meet many wonderful customers. Through his life Don served as President of the Knights of Pythias, Muskegon Sports Car Club, West Michigan Sports Car Council, Muskegon Heights Board of Commerce, and Commodore of the Mona Lake Boat Club. Don was also a member of the American Legion, Muskegon Elks, Pulaski Lodge, Tatra Hall, Lithuanian Club, Vikings, Harbour Towne Yacht Club, Eagles, Polish Union, Moose Lodge, and the Antique Boat Association of NY. Don always had a big smile and lived life to the fullest! Don was a member of the 1955, 1956, Muskegon Heights Basketball All-State Teams, that were inducted into the Muskegon Area Sports Hall of Fame in 1997. Don enjoyed any activity surrounding engines, friends, and boating. He is survived by his wife, Christina Petrongelli-Sanborn; children: Scott (Joan) Sanborn of Norton Shores and Susan (Michael) Sanborn-Poulin of N. Muskegon; four grandchildren: Atherton Sanborn, Samantha Sanborn, Gavin Poulin and Garrett Poulin; his beloved canine, Boyd. He is also survived by Christina's children: Angela, Shelbie, and Preston. He was preceded in death by his son, Jeffrey Thomas Sanborn, and brother, Dean Sanborn. A memorial service will be held at 12:00 Noon on Sunday, September 19, 2021, at The Lee Chapel of Sytsema Funeral & Cremation Services, 6291 S. Harvey St, Norton Shores, MI 49444. Visitation will be held 1 hour prior to the service at the funeral home. Following the service, a reception will be held at the Mona Lake Boat Club. Memorial contributions in memory of Don may be given to the Harbor Hospice Foundation. Please sign the family’s online guestbook at www.sytsemafh.com.

Mr. Donald D. Sanborn, age 83, of Norton Shores, MI. passed away Monday, September 13, 2021, at home with his family by his side. He was born August 31, 1938, in Chicago, IL. to Dean and Catherine (Felvey) Sanborn. Don served as a Light Weapons... View Obituary & Service Information

The family of Donald D. Sanborn created this Life Tributes page to make it easy to share your memories.

Send flowers to the Sanborn family.