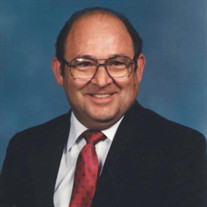 Donald A. Tubergen, age 84, passed away Sunday, February 13, 2022 in Muskegon. He was born July 29, 1937 in Muskegon to Arthur and Laura (Fairchild) Tubergen, and resided in the area all of his life. On September 6, 1958, he married the former Ellen Nixon and spent 63 years of marriage together. Don was a Veteran of the U.S. Army and stationed in Germany during the Berlin Crisis, and continued to serve his country in the Army Reserves during the Vietnam War. He was a very active and longtime member of Community United Methodist Church. Don sat on the Board of Trustees, was involved in mission trips and work camps around the country and in Africa, and also was a Youth Group leader for many years. In his spare time he enjoyed deer hunting and working in his wood shop. Don worked as a salesman for Kimberly Clark and then Nichols Paper until his retirement. SURVIVORS include his wife, Ellen; two daughters, Polly (William) Zahrt, and Susan (William) Oesterle; son-in-law, Kevin Newville; six grandchildren, Jessica (Jake) Pressley, Meghan Oesterle, Michaela Oesterle, Krista Newville, Tyler Newville and Alec Newville; three great grandchildren, Isabella, Jackson, and Xavier Pressley; brother, Nathan (Donna) Tubergen and sister, Laura Jean (Dave) Johnson. Don was preceded in death by his parents and daughter, Sally Newville. A Celebration of Don’s Life will be 2PM, Saturday March 19, 2022 at Community United Methodist Church. Visitation with the family will be one hour prior to the service, from 1-2PM at church. Memorial Contributions in Don’s name to the Veteran’s Administration will be appreciated. Share memories with the family online at www.sytsemafh.com. Arrangements by The Walburn Chapel of Sytsema Funeral & Cremation Services, 1547 W. Sherman Blvd. Muskegon, MI 49441 (231) 759-8565.

Donald A. Tubergen, age 84, passed away Sunday, February 13, 2022 in Muskegon. He was born July 29, 1937 in Muskegon to Arthur and Laura (Fairchild) Tubergen, and resided in the area all of his life. On September 6, 1958, he married the former... View Obituary & Service Information

The family of Donald A. Tubergen created this Life Tributes page to make it easy to share your memories.

Send flowers to the Tubergen family.