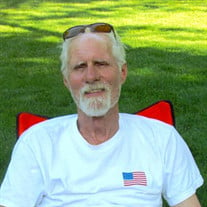 Donald “Scott” Yadlosky, age 68, passed away on Monday, February 14, 2022, in Muskegon, MI, after a short battle with cancer. Scott was born in Detroit, MI on March 2, 1953, to his parents, Donald and Catherine (Leever) Yadlosky. Soon after graduating from Henry Ford High School in Detroit, he moved to Grand Rapids, where he spent most of his life before moving to Muskegon in 2018. He worked for DTE Energy (formerly Michigan Consolidated Gas Company) for 41 years before retiring in 2021. His five true loves were golf, golf, golf, QVC, and golf. Scott golfed with a lot of people, including his brother and father. Scott was beloved by all, and he will be lovingly remembered by his parents: Donald and Catherine Yadlosky; three siblings: Donna (Craig) Nelson, Chris Clor, and Jim (Mari) Yadlosky; many nieces and nephews; close friends, Dave Proctor and Joel Whyatt; and all his golfing buddies. A MEMORIAL SERVICE will be taking place at 11:00 AM on Saturday, February 26 at The Lee Chapel of Sytsema Funeral & Cremation Services (6291 Harvey St, Norton Shores, MI, 49444), with a VISITATION taking place an hour prior. In lieu of flowers, donations in Scott’s memory can be made out to Spectrum Health Hospice (750 Fuller Ave, NE, Grand Rapids 49503). Please share memories with the family at their online guestbook at sytsemafh.com

The family of Donald "Scott" Yadlosky created this Life Tributes page to make it easy to share your memories.

Send flowers to the Yadlosky family.