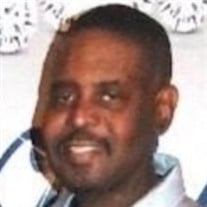 Donnell H. Harvey, age 57, met his heavenly Father on Monday, February 7, 2022. He was born on October 20, 1964, to Willie and Gladys (Harvey) Smith Sr. in Kansas City, MO. At the early age of 17, Donnell enlisted in the U.S. Air Force and began serving our country. He was a dedicated employee of 17 years, working for The Rapid in the city of Grand Rapids. He also served as 2nd Vice President of the NAACP and Vice President of Union Local 836 AFL-CIO-KILC. On June 26, 2010, he married Theresa R. McGlothin in Muskegon, MI. Together they cherished 11 years full of love, laughter, and lots of banter. In his earlier years, Donnell was quite the outdoorsman spending numerous hours hunting and fishing. He was a well-rounded and an intelligent man, who took pride in learning new things. You could always find him enjoying a book pertaining to criminal justice or listening to talk radio to stay up-to-date on anything dealing with politics. He was known to his family as the “genius” or “professor” he knew everything about anything. He took joy in debating, especially with his family. He will always be remembered for his catch phrase “simple matter of fact” when he got going. He had a love for animals but was a dog enthusiast. Donnell was a great cook and was known for his succulent meals but was keen on keeping his recipes a secret. Above all things, he was an encouraging and strong-minded soul, who wanted nothing more than to see others reach their full potential. Donnell’s infectious sense of humor and know it all personality will truly be missed by all who knew him. He is survived by his loving wife, Theresa Harvey; 4 children, Brandon J. Elliot, Breeana R. McGlothin, Keeana L. McGlothin and Taya M. McGlothin; grandson, Malakhi “Bubbers” J. Elliot; his siblings, twin brother, Ronell T. (Joy) Harvey; Todd J. (Shandra) Smith, Hester L. (Timothy) Kieft and Willie G. (Ann) Smith Jr.; mother-in-law, Bonnie M. McGlothin; sisters-in-law, Tamia L. McGlothin and Aubra Jackson; God son, Koriyon D. Harvey; best friend, Eric Hood; and a host of family and friends. He was preceded in death by his parents, Willie and Gladys Smith and brother, Turner Jackson. A Celebration of Donnell’s Life will be held on Monday, February 14, 2022 at 2:00 PM at The Lee Chapel of Sytsema Funeral & Cremation Services, 6291 S. Harvey St., Norton Shores, MI 49444. A visitation with the family will be held from 1:00 – 2:00 PM at the funeral home. Share memories with the family at www.sytsemafh.com.

The family of Donnell H. Harvey created this Life Tributes page to make it easy to share your memories.

Send flowers to the Harvey family.