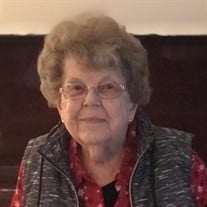 Doris Jeanne Daniels died March 21, 2022 in Muskegon. She was born in Muskegon on December 30, 1924, the daughter of Richard and Maud (Johnson) Jensen. Jeanne graduated in 1943 from Muskegon High School in the top third of her class, and then went to work at Brunswick and then at Continental Motors where she was not only a highly sought after secretarial professional but took the initiative to acquire the skills on her lunch hours to become a skilled switchboard operator. Jeanne was finally able to realize her dream of attending college and flourished in the collegiate environment, excelling in English and writing courses. She secured an administrative assistant position in the Life Sciences Department at Muskegon Community College that she thoroughly enjoyed for 19 years. Jeanne, baptized in March of 1925, was a lifelong member of Samuel Lutheran Church in Muskegon. She supported her church in many capacities; singing in the choir, as a greeter, visiting shut-ins, serving on multiple committees, and much more. She loved to sing; even singing with the Vikings Lodge and the Living Christmas Tree! Jeanne met and married her husband, Owen Daniels, in 1957 in Muskegon. They raised two daughters: Lorna Bradford and Melinda Kelley. She was a devoted follower of her husband’s professional career and as well as his musical sideline. After the children had left the proverbial nest, new interests and opportunities developed. Together, they enjoyed ballroom dancing with the Town Club dance group; even resulting in a dance cruise to Hawaii! Travel was a large part of life and Jeanne experienced Japan, Okinawa, Germany, Italy, England, Alaska, and a large part of the lower 48. Preceded in death by her younger sister, Arlene Riisberg, Jeanne is survived by her husband, Owen, her daughters, Lorna and Melinda, three grandchildren, Morgan Sansbury, Ryan Taylor, and Daniel Mundy and four great grandchildren, Kale Sansbury, Madeline Sansbury, Asher Taylor, and Eden Taylor. A MEMORIAL SERVICE for Jeanne will be held 3:00 PM Saturday, March 26, 2022 The Lee Chapel of Sytsema Funeral & Cremation Services, 6291 Harvey St., Norton Shores, MI 49444 with VISITATION one hour prior to her service (2-3 PM). MEMORIALS in Jeanne’s name may be directed to the Blue Lake Fine Arts Camp. You may sign her online guestbook at www.sytsemafh.com “Dawn breaks and blossoms open Gates of paradise”. -D.J. Daniels

Doris Jeanne Daniels died March 21, 2022 in Muskegon. She was born in Muskegon on December 30, 1924, the daughter of Richard and Maud (Johnson) Jensen. Jeanne graduated in 1943 from Muskegon High School in the top third of her class, and then... View Obituary & Service Information

The family of Doris Jeanne Daniels created this Life Tributes page to make it easy to share your memories.

Send flowers to the Daniels family.