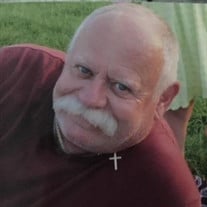 Mr. Douglas Niles Wilson, age 71, passed away after a brief illness on Thursday, October 14, 2021, surrounded by all of his girls. The second child and only son, Doug was born in Hart, Michigan on April 2, 1950 to Durward (Dan) and Gladys Maxine (Woodin) Wilson. In 1952 Doug contracted Polio, although he was just 2 years old at the time, he would always be haunted by those treatments. Doug joined the United States Army following his 1968 graduation from Fruitport High school. He served in Vietnam with the 25th Infantry, Electric Strawberries, as a Sergeant in the Army Corp of Engineers where he earned the Bronze Star for his heroic service. A proud Vietnam Veteran, Doug served 1 tour before returning to Muskegon in the winter of 1972 where he would meet the love of his life. One cold day in February 1972, Doug came upon a car in a ditch in Grand Haven, there he would rescue his future bride, Yvonne Stephens. After a whirlwind romance they were married September 23, 1972 and the love story would continue for 49 years. Daughters were all he wanted, little girls that would never tire of his hugs and adoration, he would have 2 and they could not have adored him more. Doug attended MCC to obtain his drafting certificate but after a brief time learned that was not for him, he went on to spend many years working as a supervisor at various foundries before finding his passion at Eagle Ottawa Leather Co where he would stay for 20+ years, working as a supervisor, inventory control manager and product manager, Doug loved many of his years with the company, so much so that he enlisted both of his daughters to work beside him. Always creative, always inventive, and fearless to take on a challenge, Doug remodeled his own home (many times) as well as those of friends and his daughters. He was self-taught in plumbing, electrical, wood working, roofing, mechanics, landscaping, gardening and much, much more. Simply put, there was nothing he could not do. A man of incredible patience and painstaking perfection he created works of art in his workshop, often gifting them to those he loved. He was always there for anyone needing a hand, he was our teacher and friend, one who never asked for anything in return. Doug plowed driveways for 30+ years, waking long before the sun and plowing for hours before working a full shift at his “real job”, he loved to drive his truck and plow in the winter, but not as much as he loved spending the money he made on his girls with special, top-secret gifts under the Christmas tree. The spreadsheets he created to keep track of his customers were a passion for him, he would spend hours creating and maintaining his data, loving every minute of it. He loved and was loved completely and ferociously. A husband that adored his wife and would do anything for her, including turning their home into the Victorian she always dreamed of. A daddy that would create a luge track out of snow and ice in his back yard just for his kids and the neighbor kids to play on, one that built his little girls a playhouse with an upstairs and carpet! The kind of dad that would stop up at the elementary school before second shift just to see his babies before heading to work, and then apologize to them 20 years later, for not spending enough time with them. When his “sweetie”, (granddaughter Anna) was born, his world became her. “Two peas in a pod”, they would have adventures and spend time playing and talking. As she grew older, he would encourage her love of crane machines and they would spend hours “winning” stuffed animals. There was nothing he would not do for her and their bond was so very special. The only thing that came close to his love of his granddaughter was his love for his dogs and their love for him. His baby Ginger brought him so much joy in recent years and she will miss him greatly. Doug loved family above all else and while his wife Vonnie and daughters Kristina Trasky, Stephanie Wilson, (favorite) son-in-law Brian Trasky and granddaughter Anna will be lost without him, we know we are not alone. Sharing in our grief are his beloved baby sister Lourie (Neil) Rechenberg and his brothers & sisters in life; Sandi (Larry) Fairbanks, Ed Stephens, Terry Stephens & Pam (Tom) Gamez. Nieces and nephews; Dana Lorian, Melissa Hoodhood, Darek (Kim) Senkow, Joel (Renee) Wiard, Al Shaker, Stacy (Luis) Suarez. Great Nieces & nephews; Lexxis (David) Ward, Keyara (Jordan) Kaufman, Sophia Wiard, Joelie Havey, Izaak Shaker, Jaycee Shaker, Orion Shaker, Lowen Senkow, Genevieve Senkow, Luis Suarez, Marisa Suarez & Marcos Suarez , 4 great-great nieces and nephews as well as Aunts and Uncles Sally Woodin, JoAnn Woodin, Darlene Wilson,& Roger (Bea) Wilson. He also leaves behind so many precious friends and extended family. Proceeding him in death are his parents, Dan & Maxine Wilson, in-law parents, Stan & Ann Stephens, and sister Susie Senkow as well as many aunts, uncles and cousins whom he loved so dearly. A long-time member of Fellowship Church and Lifetime member of the Don Rea VFW Post #8846. Funeral service will be held at 11AM at Fellowship Church (4200 East Apple Ave., Muskegon, MI 49442) with Rev. Mike VanKampen officiating. VISITATION will be from 1-4 PM Sunday, October 17, 2021 at The Sytsema Chapel of Sytsema Funeral & Cremation Services, 737 E. Apple Ave., Muskegon, MI 49442 and one hour prior to his service on Monday at church. Burial with full military honors will be immediately following his service at Evergreen Cemetery. MEMORIALS in memory of Doug may be directed to his granddaughter, Anna’s, education fund c/o Kristina Trasky or to the Don Rea VFW Post #8846. You may sign his online guestbook at www.sytsemafh.com

Mr. Douglas Niles Wilson, age 71, passed away after a brief illness on Thursday, October 14, 2021, surrounded by all of his girls. The second child and only son, Doug was born in Hart, Michigan on April 2, 1950 to Durward (Dan) and Gladys Maxine... View Obituary & Service Information

The family of Douglas Niles Wilson created this Life Tributes page to make it easy to share your memories.

Send flowers to the Wilson family.