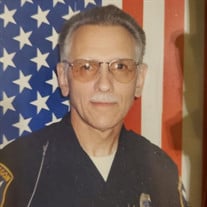 Edward Bleich, age 84, passed away on Saturday, February 5, 2022. He was born on November 9, 1937, to Orel and Pearl (Knott) Bleich in New York, NY. On September 28, 1957, he married the love his life, the former Janet Arneberg, and they spent 58 loving years together until her passing in September of 2016. Edward proudly served as a City of Muskegon Police Officer for 27 years. After his retirement from law enforcement, he went on to work at Witt Buick for many years. Edward was a friendly, kind, and caring person who always put others first. His outgoing demeanor made his daily errands always run longer than expected as he rarely left the house without seeing many familiar faces. Edward was an avid outdoorsman and loved his home away from home, his beloved cabin up north. He had a passion for cars which made his time working at the car dealership no work at all. He was an active member at First Lutheran Church. The greatest love in his life, above all else, was his family. He is survived by his children, David Bleich, Jim Bleich, Randy (Virginia) Bleich, Karen (Marc) Norman; grandchildren, Jason, Chad, Kevin, Stephanie, Kelsey, Amy, Ryan, Kara, Seth, Grace; many great grandchildren, two great great grandchildren; many special friends, including Karen Harwood; brother Russell (Phyllis) Bleich; sister-in-law, Delores Bleich; and many nieces and nephews. He was preceded in death by his parents; wife, Janet Bleich; brother, Richard Bleich; and granddaughter, Jennifer. A VISITATION with Edward’s family will take place on Friday, February 11, 2022, from 4:00 PM – 7:00 PM at The Lee Chapel of The Sytsema Funeral & Cremation Services, 6291 S. Harvey St. Norton Shores, MI 49444. A MEMORIAL SERVICE for Edward will take place on Saturday, February 12, 2022, at 2:00 pm at First Lutheran Church (1206 Whitehall Rd.) with a catered meal to follow at church. Edward will be inurned at the church’s columbarium by his wife, Janet. For a more lasting memory, donations in Edward’s name can be made to either the Harbor Hospice Foundation or the First Lutheran Church. Feel free to sign the family’s online guestbook and share a memory at www.sytsemafh.com.

The family of Edward Bleich created this Life Tributes page to make it easy to share your memories.

Send flowers to the Bleich family.