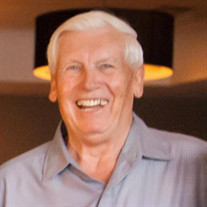 Mr. Edwin Andrew “Ed” Groszowski, age 90, passed away at his home on Thursday, March 10, 2022. He was born at his family home in Muskegon on August 5, 1931 to Andrew and Leocadia (Hojnacki) Groszowski. Upon graduation, Ed was the first Muskegon local to be drafted into the United States Marine Corps. He went on to serve his country proudly in the Korean War. On December 20, 1952, Ed married the former Elaine J. Huber in Muskegon. He worked for Challenge Machine from 1953 – 1975, and then for Newhouse Printers Supply from 1975 until his retirement in 2002. Ed served on the Roosevelt Park City Council, was an umpire for the Roosevelt Park Little League for many years and was a supporter of the Muskegon Big Reds and the Muskegon Polish Festival. He, along with his wife, enjoyed traveling with the Orchard View Travelers Group and especially enjoyed a memorable trip to Nova Scotia. They also enjoyed the yearly week spent at Campbell Lake in Hesperia, Michigan with family and friends. Ed enjoyed fishing, puzzles, and playing games with his granddaughters. He is survived by his loving wife of 69 years, Elaine; two daughters, Nancy (Larry) Hooker and Lori (Shane) Groszowski; two granddaughters, Jill (Andrew) Maciejewski and Beth Hooker; and one great-grandson, Parker Maciejewski. He was preceded in death by his parents; two sons, Paul and Gary Groszowski; one brother and two sisters. SERVICES for Ed will be held at 11:00 AM Friday, March 18, 2022 at The Lee Chapel of Sytsema Funeral & Cremation Services, 6291 Harvey St., Norton Shores, MI 49444. VISITATION will be from 6-8 PM Thursday at The Lee Chapel and one hour prior to his service on Friday. Burial will be in Sunrise Memorial Gardens. MEMORIALS in memory of Ed may be directed to the Muskegon Polish Festival or the Roosevelt Park Little League. You may sign his online guestbook at www.sytsemafh.com

The family of Edwin Andrew Groszowski created this Life Tributes page to make it easy to share your memories.

Send flowers to the Groszowski family.