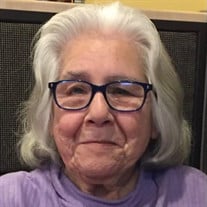 Elma Bodman, age 91, met her Lord and Savior Monday, February 21, 2022 surrounded by her loving family. She was born February 17, 1931 to Jesse and Maria (Patino) Gonzalez in Saginaw, MI, and shortly after her family made their way to Muskegon. She graduated from Muskegon High School class of 1950. After graduation, she continued her education at Baker Business College where she studied office machines, and earned her associates degree. In 1959, she married the father of her children, the late Nils E. Bodman. She took various career paths working for Continental Motors, and the Tally Ho restaurant where she was manager. Then she finished her career at JC Penny where she worked in retail for 25 years retiring in 1995. She was known for her strong work ethic. She had a servant’s heart. Elma was constantly on the go and was known to many as a “worker bee.” In her spare time, she enjoyed playing bingo, traveling, movies, pressing her luck at the casino, cooking and spending time with friends. She had a kind heart for both people and animals and put others' needs before herself. You could find her snow shoveling and raking for her elderly neighbors even at the age of 80. She had unconditional love for her family, especially her grandchildren. She is survived by her 3 children, Nils “Ed” (Nadji) Bodman, Maria “Vicky” Bartrem, and Rebecca “Becky” (William) Meggs; 7 grandchildren, Tessa Meggs, Wyll Meggs, Sam Bodman, Alexandra Bodman, Benjamin Bodman, Leslie (Jake) Sehr, and Noah Buikema; nieces, Kim Martin, Michelle Baggett, and Lisa Baggett; and nephew Ken (Loraine) Rates. She was preceded in death by her parents, Jesse (Maria) Gonzalez; sisters, Linda (Harry) Rates and Dora (Chuck) Baggett; brother, Jesse Gonzalez PFC, and niece, Roberta Gonzalez. A Mass will be held on Friday, February 25, 2025 at 3:00PM at St. Francis de Sales Catholic Church, 2929 McCracken St., Norton Shores, MI 49441. A visitation with the family will be held one-hour prior at the church. In lieu of flowers, memorial contributions in Elma’s honor can be directed to Embassy Covenant Church in Muskegon for the Hand to Hand project, Wings of Hope Hospice, Allegan MI, or your local food pantry. In honor of Elma’s favorite color, the family would like to invite you to join them in wearing the color blue to the service. Arrangements entrusted to The Walburn Chapel of Sytsema Funeral & Cremation Services, 1547 W. Sherman Blvd., Muskegon, MI 49441. Share memories with the family at www.sytsemafh.com.

Elma Bodman, age 91, met her Lord and Savior Monday, February 21, 2022 surrounded by her loving family. She was born February 17, 1931 to Jesse and Maria (Patino) Gonzalez in Saginaw, MI, and shortly after her family made their way to Muskegon.... View Obituary & Service Information

The family of Elma Bodman created this Life Tributes page to make it easy to share your memories.

Send flowers to the Bodman family.