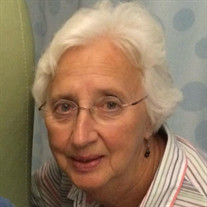 Esther R. Gray, age 90, of Spring Lake passed away Wednesday, February 16, 2022, at Mercy Hospital in Muskegon. She was born April 3, 1931, in Grand Rapids, MI to Robert A. and Pearl Rose (Baldwin) Foster. She married Richard “Dick” Gray on May 3, 1952, in Grand Rapids, MI. He preceded her in death on April 27, 2013. Esther graduated from Butterworth Hospital School of Nursing in 1952. She worked at North Ottawa Community Hospital for many years until her retirement in 1995, she loved nursing and the “family” of friends she met while working. Esther loved reading, traveling especially down south, going to the cabin, and most of all spending time with family. She is lovingly remembered by two daughters, Kathy (John) Fortino and Jan (Jerry) Allen; two grandchildren, Steve (Audra) Fortino and Anne (Damian) Rositch; four great-grandchildren: Scott Fortino, Luca Fortino, Owen Rositch and Ella Rositch; her brother, Robert (Norine) Foster; and many nieces and nephews. She was preceded in death by two sisters, Hattie VanderMolen and Betty Hulbert; four brothers, Wesley Foster, Al Foster, Jack Foster and Wilmer Foster. A celebration of life will be held in the summer. Memorials in Esther’s honor may be given to Hospice of North Ottawa Community. Arrangements entrusted to The Spring Lake Chapel of Sytsema Funeral & Cremation Services, 213 E. Savidge St., Spring Lake, MI 4956. Share memories with the family at their online guest book at www.sytsemafh.com.

The family of Esther R. Gray created this Life Tributes page to make it easy to share your memories.

Send flowers to the Gray family.