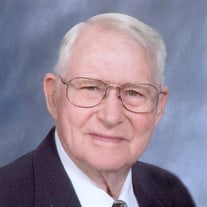 Eugene James Meyers, 98, passed away peacefully at home Friday, September 3, 2021. Eugene (Gene) was born on June 23, 1923, the youngest child of Muse and Hazel (Poulson) Meyers. A Fruitport Twp. resident, the family descended from early Cloverville pioneers. Mr. Meyers was raised on a productive farm during the Great Depression. That life taught him independence and self-sufficiency. Those qualities characterized his life as he built the home he and his wife, Arlene Helen (Kulicamp), lived throughout their 62 year of marriage. Mr. Meyers attended Beach School and graduated from Muskegon Hts. High School. He drove a tank during WWII and then apprenticed as a tool and die maker. He was employed by Midwest Machine during his working years. Mr. Meyers exemplified strong Christian and family values, most recently being a member of Olivet Reformed Church. He leaves memories of family road trips, especially to the western states where he loved the wide open-spaces. He enjoyed canoeing in Canada, archery, and spending time at “the cabin” up north on the Pere Marquette River. He was not opposed to tracking deer and turkey and enjoyed casting a line for a fat brown trout. The deceased was preceded in death by his wife, Arlene in 2014. He is survived by his son, David Craig (Merry Kim) Meyers, and daughter, Laura Jean Platt, with whom he lived during his final chapter. Mr. Meyers was blessed with four granddaughters, Erin (Chris) Brown, Eve Mills, Leigh (Matthew) Mast, and Caroline (Drake) Sadler along with seven great grandchildren. A Funeral Service will be held at 2:30PM, Tuesday, September 7, 2021 at The Lee Chapel of Sytsema Funeral & Cremation Services, 6291 S. Harvey St., Norton Shores, MI 49444 with Rev. Lily Marx of St. Gregory’s Episcopal Church officiating. Visitation with the family will be from 2:00 – 2:30PM. Burial to take place at Mona View Cemetery. Those wishing to make a memorial donation might consider the Land Conservancy of West Michigan (400 Ann St. NW, Suite 102, Grand Rapids, 49504) or Feeding America West Michigan (864 West River Center Drive, Comstock Park, MI 49321). Please feel free to sign the online guestbook at www.sytsemafh.com.

The family of Eugene J. Meyers created this Life Tributes page to make it easy to share your memories.

Send flowers to the Meyers family.