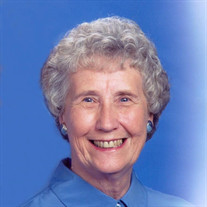 Frances Jean Jones, age 86, passed away Tuesday, February 22, 2022. She was born March 29, 1935 in Muskegon to Garrett and Jeannette (Holwerda) Tjapkes. On September 23, 1955, she married Howard E. Jones in Muskegon and he preceded her in death on June 3, 2015. Fran worked for West Michigan Truss Company for 7 years prior to her retirement in 1992. She was a member of Fruitport CRC and along with her husband founded the Cadets and Calvinettes program at the church. Fran was a former member of the Hi-Nabors Square Dancers and the Muskegon Shuffleboard Club. She is survived by her children: Dennis (Deb) Jones and Kathlyn (Don) Sexton; grandchildren: Garrett (Ashley) Jones, Alan (Morgan) Jones, Brandie (James) Rupp, Melissa (Christopher McGarvey) Sexton, Rebekah (John) Hodson, Tabitha Sexton, and Kelli Sexton; 4 great-grandchildren: Tanner, Oakley, Kayson, and Noah; and her sister, Carol (Jacob) Swierenga. She was also preceded in death by a son, Kenneth A. Jones; parents; and siblings: Elmer Tjapkes, Nellmae Kline, and Helen Miles. A celebration of Fran’s life will be held 10:00 AM Saturday, March 26, 2022 at Fruitport Christian Reformed Church (3520 E. Pontaluna Rd.). Friends are invited to join the family at that time to remember and honor Fran, as well as recognize her birthday, with spring flowers and hymns. Memorials to Fruitport CRC in Fran’s name will be appreciated. Share memories with the family at their online Guest Book at www.sytsemafh.com Arrangements by The Lee Chapel of Sytsema Funeral and Cremation Services, 6291 S. Harvey St., Norton Shores, MI 49444 (231) 798-1100

Frances Jean Jones, age 86, passed away Tuesday, February 22, 2022. She was born March 29, 1935 in Muskegon to Garrett and Jeannette (Holwerda) Tjapkes. On September 23, 1955, she married Howard E. Jones in Muskegon and he preceded her in death... View Obituary & Service Information

The family of Frances J. Jones created this Life Tributes page to make it easy to share your memories.

Send flowers to the Jones family.