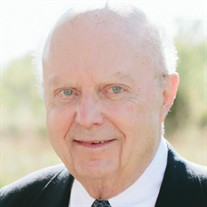 Fred Calvin Culver Jr., age 89, passed away on March 19, 2022 at his residence. He was born on March 18, 1933 to Ruth (Chivers) and Fred C. Culver Sr., in Jackson, MI. Fred graduated from University of Michigan in 1955 with a B.A. in political science. He went on to serve his country in the United States Marine Corps for two years, achieving the rank of first lieutenant. In 1960, he graduated with a law degree from Wayne State University, where he was the editor of the Law Review. Fred found satisfaction in his work as an attorney in Muskegon until his retirement in 2003. He spent the majority of his time practicing corporate law with Landman, Hathaway, Latimer, Clink, and Robb before co-founding Culver, Knowlton, Even and Franks. In his retirement, Williams|Hughes graciously provided him an office where he enjoyed going occasionally to help in any way he could. Fred enjoyed golfing and reading. He served as a past president of the Muskegon Community Foundation and worked with community development efforts in the Muskegon Area. On June 25, 1955, he married Mary Elizabeth Culver and she survives him along with two children, Cassie Johnson, Carter (Donna) Culver; six grandchildren, Katie Johnson, Carrie (Kyle) Smith, Kyle Johnson, Lily Culver, Matt Culver and Sophie Culver; and great-granddaughter, Madeline Smith. Fred was preceded in death by his parents and brother, Chandler Culver. The family plans to have a private gathering this summer to celebrate Fred’s life. Share memories with the family at www.sytsemafh.com.

The family of Fred Calvin Culver Jr. created this Life Tributes page to make it easy to share your memories.