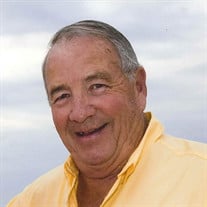 Gar Maurice Fredricks, age 85, passed away at home on Friday, August 13, 2021, in Muskegon. Gar was born on January 9, 1936, in Muskegon to Maurice and Alyce (Chamberlain) Fredricks. On September 7, 1957, he married the former Joan Smith in Muskegon. After graduating from high school Gar enlisted in the Navy, where he proudly served for six years before returning to Muskegon and opening Fredricks Construction, which he owned and operated until he retired in 1995. Gar was involved in many different organizations throughout his life; he was a member of the Muskegon Elks, the Polish Falcon, the American Legion and VFW in Florida, and also served as the Commander of the Lakeside Veterans Club for many years. He served as the president of the Catholic Central Credit Union and was on the board at Service One Credit Union. Gar also enjoyed fishing and snowmobiling at his cabin in Ruby Creek, Michigan. He was also proud to have won many ribbons back in the day while competing at the Circle S Ranch with his horse named Kip. Gar is survived by his wife, Joan; their children: Kurt (Suzanne) and Bradley (Kelly); five grandchildren: Brandi, Trevor, Logan, Spencer, and Carsen; four great-grandchildren: Kayden, Ava, Brody, and Brynn; and three sisters: Marlyce Harte, Renee Galombeck, and Sally Gould (Jim); he was preceded in death by his parents, Maurice and Alyce; his granddaughter, Candice; his brother, Ben Fredricks; and his brother in-law, Larry Galombeck. Per Gar’s wishes there will be no funeral service, but donations in his memory can be made out to either the Harbor Hospice Foundation or St. Jude Children’s Research Hospital. The family would like to thank Kyle Goldberg for all his recent help in caring for Gar. Arrangements by the Walburn Chapel of Sytsema Funeral & Cremation Services, 1547 W Sherman Blvd, Muskegon, MI 49441.

Gar Maurice Fredricks, age 85, passed away at home on Friday, August 13, 2021, in Muskegon. Gar was born on January 9, 1936, in Muskegon to Maurice and Alyce (Chamberlain) Fredricks. On September 7, 1957, he married the former Joan Smith in... View Obituary & Service Information

The family of Gar M. Fredricks created this Life Tributes page to make it easy to share your memories.

Gar Maurice Fredricks, age 85, passed away at home on Friday,...

Send flowers to the Fredricks family.