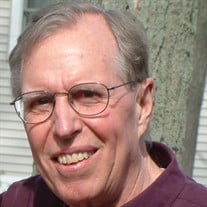 Garry Lee Kieft, age 79, of Spring Lake passed away Saturday, April 2, 2022, at Spectrum Hospital in Grand Rapids. He was born July 6, 1942, in Grand Haven to Clyde and Helen (Jannenga) Kieft and he married Francine Ruth Vanderwel of Muskegon on April 14, 1962. Garry graduated from Grand Haven High School in 1960 and then from Western Michigan University in 1964. Upon graduation, Garry joined his father Clyde at Kieft Agency Inc., in Spring Lake. In 1985, Garry’s son, David, also joined him at Kieft Agency Inc., and it was his great joy to work with David for nearly 37 years. Garry was an avid fitness buff, enjoying over 30 years with the same fitness group at the Grand Haven YMCA. Garry loved snow skiing, spending as much time as he could with family and friends at his vacation home at Glen Lake, MI, as well as traveling throughout the US and Europe. Garry was blessed with a wonderful circle of dear friends and extended family. Above all, Garry was devoted to his children, grandchildren, and in particular, his wife Fran – his best friend, confidant, and true partner in all things. Garry will be deeply missed by all who knew him. Garry is lovingly remembered by his wife Francine; one daughter, Ruth Kieft Baldus; his two sons, David (Robin) Kieft, and Daniel (Alana) Kieft; six grandchildren: Stephanie Kieft, Aria (James) Richardson, Kathryn Kieft, and fiancé Kyle Walter, Maria (Logan) White, Collin (Jessica) Kieft, and Alec Kieft; one great grandchild, Francina Richardson; brother-in-law, Phillip Vanderwel; sister-in-law, Donna (James) Vandyken; and numerous nieces and nephews. Garry was preceded in death by his infant son, Douglas Garry; his parents, Clyde and Helen; sister, Ruth Kelly; brother-in-law, Harry Kelly; and sister-in-law, Cheryl Vanderwel. A visitation will be held from 4 – 7 p.m. on Friday, April 15, 2022, at The Lee Chapel of Sytsema Funeral and Cremation Services, 6291 S. Harvey St., Norton Shores, MI 49444. A private funeral will take place. In lieu of flowers memorials to Love in Action or Grand Haven Christian School are appreciated. Share memories with the family at their online guest book at www.sytsemafh.com

The family of Garry Lee Kieft created this Life Tributes page to make it easy to share your memories.

Send flowers to the Kieft family.