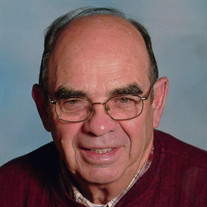 Gene A. Wessels, age 87, passed away Tuesday, March 22, 2022. He was born November 4, 1934 in Rock Falls, IL to Frank and Edna (Hayen) Wessels and lived most of his life in the Muskegon area. On April 14, 1962, he married Margaret A. Stribley in Muskegon and she preceded him in death on March 11, 2012. Gene worked over 30 years as an electrician with Westshore Electric and retired in 2006. He was a member of the former Lakeside United Methodist Church and the Muskegon Eagles. Gene’s passion in life was spending time with his family, his children and grandkids. He enjoyed bowling, camping and sporting events and loved to go places and do things, but not stay too long. Survivors include 2 children, Michael (Betsy) Wessels, Karen Cunningham; 5 grandchildren, Elizabeth Wessels, Zakary Wessels, Makenzie Wessels, TJ Cunningham, Gavin Cunningham; 2 step-grandchildren, Megan Snoeyink, Mason Snoeyink; 1 sister, Dorothy (Louis) Neumann; 1 brother-in-law, Ronald (Lynn) Stribley; 2 sisters-in-law, Judy (Jim) Austin, Patt (Harold) VanVelzen; and several nieces and nephews. He was preceded in death by his wife, Margaret Wessels; his son-in-law, Tom Cunningham; his parents; 1 brother, Donald (Bev) Wessels; and 1 sister, Darlene (Jack) Sikkenga. A Funeral Service will be held 11:00 AM Monday, March 28, 2022 at The Lee Chapel of Sytsema Funeral & Cremation Services, 6291 Harvey St, Norton Shores, MI 49444 with Steve Allen officiating. Visitation will be held one hour prior to the service. Interment will take place at Lakeside Cemetery. Memorial Contributions may be directed to the Harbor Hospice Foundation. Sign the guestbook online at www.sytsemafh.com

The family of Gene A. Wessels created this Life Tributes page to make it easy to share your memories.

Send flowers to the Wessels family.