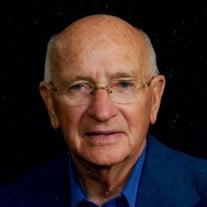 George Junior Dake, 91, passed peacefully into the arms of the Lord on Sunday, August 29th, 2021. He was deeply loved and will be greatly missed by all who knew him. He was born December 26th, 1929, to farmers George and Ada Dake, during the Great Depression. He grew up in Fremont and graduated from Fremont High School, where he lettered in football. After high school, George enlisted in the US Navy, and served as a Fire Control Technician on the USS Shelikof during the end of the Korean War. He became a Journeyman Electrician thru his Navy training and he worked for IBEW Local 275 for 43 years, finishing his career at Whittaker and Hall Electric. George enjoyed many activities and was very involved in his local community, volunteering for youth football and many charity functions. He loved the outdoors and enjoyed boating, water skiing, fishing and hunting. He had many a good bird dog turned into a pet by his children. He was on both golf and bowling leagues for many years. George was also active in his church communities, at both St Thomas the Apostle and Prince of Peace Catholic churches, participating in doing electrical maintenance and serving as an usher. He loved to travel with Mary, his wife of 65 years, and their family. They camped, went on many trips and cruises – both here and abroad, and ‘snow birded’ in Phoenix, Arizona for many winters. They were members of the Vikings, Elks, and Eagles, and attended many functions there over the years; they loved to dance and attended dances frequently until their 80s. He is survived by his son Tom (Lisa) Dake; his daughters Sharon (Jerry) Cutter, Pamela (Dale) Bennett, and Terri (John) Housler; his grandchildren, Ryan Cutter, Kimberly Barricklow, Adam (Audrey) Dake, Christopher Dake, Trent (Ashley) Housler, Emily Housler, Heather Phillips, Jake Nelson, and Casey Nelson; his great-grandchildren, Jadiah, Kylen, Forever, Nora, Kaleb, Sophie, Ayden, Amylia, Ashlynn, and Lincoln; loving nieces and nephews, and many good friends. He was preceded in death by his wife Mary, his parents, his brothers Carl (Anne) Dake, Milton “Bill” (Marie) Dake, his sisters Chloe (Ed) Kueneman, Garnet (Millard) Reed, and his granddaughter Alicia Phillips. Due to current COVID-19 restrictions, and for the safety of all, services are limited to immediate family only. We look forward to gathering together in the future, when it is appropriate to do so. Your thoughts and prayers are much appreciated. We kindly ask that no flowers be sent. Please consider donating to Christian Care Memory Center, 2035 S Sheridan Dr, Muskegon, MI 49442. Arrangements handled by The Sytsema Chapel of Sytsema Funeral & Cremation Services, 737 Apple Avenue, Muskegon, MI 49442. Sign the online guestbook at www.sytseamfh.com

George Junior Dake, 91, passed peacefully into the arms of the Lord on Sunday, August 29th, 2021. He was deeply loved and will be greatly missed by all who knew him. He was born December 26th, 1929, to farmers George and Ada Dake, during the... View Obituary & Service Information

The family of George Junior Dake created this Life Tributes page to make it easy to share your memories.

George Junior Dake, 91, passed peacefully into the arms of the...

Send flowers to the Dake family.