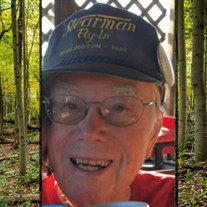 Dr. Gerald J. “Jerry” Applegarth, 91, passed away Thursday afternoon, April 14, 2022, in Manistee. He was born September 7, 1930, in Muskegon to Gerald W. and Valerie (Ames) Applegarth, and lived his life here, before moving to Manistee recently. He was a Podiatrist in Muskegon for 32 years before retiring in 1992. He served in the United States Army as a medic during the Korean War. Jerry was a member of Central United Methodist Church. He enjoyed hunting, fishing, gardening, travel and spending winters in the Florida Keys. He cherished spending time with his granddaughters, teaching them all about fishing and nature. He loved his two great grandchildren as well and enjoyed visits and playtime with them. After each visit he’d comment, “They are so advanced, they are so smart,” he was so proud of them. He always felt grateful to Muskegon General Hospital for giving him the opportunity to practice in the medical field. On December 28, 1956, Jerry married Eleanor “Ellie” Maxwell, and she survives him along with three children; Valenda Applegarth, Jerel (Dan) Bathrick, Kimberly Applegarth, grandchildren; Kendra (Jason) Anderson, Kiley (Danny) Brown, great grandchildren; Wyatt and Hannah Anderson, one brother John (Sharon) Applegarth, and one sister JoAnn (Jerry) Privasky. Jerry is also survived by numerous nieces, nephews as well as great nieces and nephews. Cremation has taken place at Sytsema Funeral Home in Norton Shores. According to Jerry and Ellie’s wishes, there will be no visitation or memorial service. Contributions in memory of Dr. Applegarth may be made to Central United Methodist Church (Muskegon), St. Jude’s Hospital or M.A.P. Mission For Area People-Food Distribution Center (Muskegon Heights). Arrangements have been entrusted to The Lee Chapel of Sytsema Funeral and Cremation Services, 6291 S. Harvey St., Norton Shores, MI 49444.

The family of Gerald J. Applegarth created this Life Tributes page to make it easy to share your memories.

Send flowers to the Applegarth family.