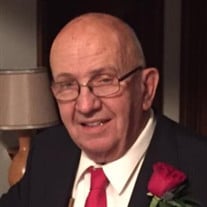 Gilbert V. “Gil” Vanderberg, Jr. 90, of Grand Haven, died Wednesday, October 13, 2021, in Allendale. He was born March 8, 1931, in Muskegon to Gilbert V. Vanderberg, Sr., and Florence L. (Swanson) Vanderberg. He married his wife of 67 years, Virginia A. Mudgett, in Muskegon in 1954. Survivors include his wife, Virginia; son, Alan G. “Al” Vanderberg (Leslie); daughter Margaret L. “Mitzi” Monroe (Randy Monroe) of Springfield, OH; grandchildren, Samantha Vanderberg, of Ventura, CA Peter Vanderberg, Anna Vanderberg and Amy Vanderberg, of Grand Rapids, MI Stephen Monroe (Crystal) and Jonathan Monroe, both of Springfield, OH; sister-in-law, Delores Vanderberg of Farmington Hills; nieces, Lisa (Vanderberg) Kelly of Toronto, Canada, and Vicki (Vanderberg) Kosowan of Farmington, MI and two great-grandchildren, Noah and Emily Monroe of Springfield, OH. He was preceded in death by his parents, and brother, Vernon L. Vanderberg of Farmington, MI. Gil was a member of the Vanderberg Fisheries commercial fishing family that plied the waters of Lake Michigan for four generations from Grand Haven, Muskegon and other ports and prior to that in the Netherlands. He often worked on the tugs until he left for college where he completed bachelor and master’s degrees in Vocational Arts at Michigan State College and University and the General Motors Institute. He was a passionate Spartan fan throughout his life. Gil was a teacher at Grand Haven High School for 40 years and enjoyed overseeing ticket sales for sporting events, the Plymouth Trouble Shooting Team, and the drivers education program. He also served for 30-years as the President of the Ottawa County School Employees Credit Union. Gil delighted in the company of his family and friends and will be greatly missed by many. The funeral for Gil will be held at 10:00 a.m. Saturday, October 16, 2021, at The VanZantwick Chapel with Pastor Todd Schmidt officiating. Friends may meet the family from 4 – 7 p.m. on Friday, October 15, at The VanZantwick Chapel of Sytsema Funeral & Cremation Services, 620 Washington Ave., Grand Haven, Michigan 49417. Memorials to Hospice of North Ottawa Community are appreciated. Share memories with the family at their online guest book at www.sytsemafh.com.

The family of Gilbert V. "Gil" Vanderberg created this Life Tributes page to make it easy to share your memories.

Send flowers to the Vanderberg family.