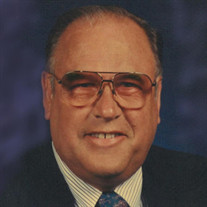 Mr. Glen Howard, age 85, of Grand Haven passed away Monday, May 9, 2022, at North Ottawa Community Hospital. He was born June 20, 1936, in Glenburn, North Dakota to William and Evelyn (Christopher) Howard. On April 28, 1962, he married Gloria Ulmer and after 54 years of marriage she passed away in 2016. Glen graduated from Grand Haven High School in 1955 and then enlisted in the US Army in 1957 and served in Germany. He was a 5-year veteran. Upon graduating he was employed with Anderson Bolling, then Tri-Cities Construction, drawing blueprints for commercial buildings. He then went to work for Jim Swarts Architectural firm in Grand Rapids and remained there until the recession in the 70’s. In 1972 he became a distributor for Fountain Industries. While developing his coffee business, he returned to Anderson Bolling as a night supervisor until his business was able to support his family. He retired in 1995 at the age of 57. He was a past member of the East Side Lions Club in Muskegon. He enjoyed golfing, fishing, and wood working and most of all his grandchildren. He is leaving behind his son, Tom (Ione) Howard and daughter-in-law, Anita Howard; seven grandchildren and eight great-grandchildren; sister, Elaine Cummings. He was preceded in death by his wife, Gloria, son, Jim and great-grandson, Trevor. Funeral services will be held 11:00 AM Friday, May 13, 2022, at The VanZantwick Chapel of Sytsema Funeral & Cremation Services, 620 Washington Ave, Grand Haven, MI 49417. Visitation will be held 6-8 PM Thursday, May 12, 2022, at the funeral home. Interment will take place in Lakeshore Cemetery. Memorial contributions in memory of Glen may be given to St. Jude Children’s Research Hospital or Make-A-Wish Foundation. Please sign the family’s online guestbook at www.sytsemafh.com.

The family of Glen Howard created this Life Tributes page to make it easy to share your memories.

Send flowers to the Howard family.