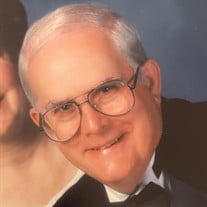 Gordon Bonifield, 88, passed away at home on Friday, December 10, after contracting Parainfluenza Virus Type 3. He was born in Grand Rapids and spent his childhood in Reed City, moving to Muskegon at age 10. He graduated from Muskegon High School, and earned an associate’s degree from Muskegon Community College. While attending high school, he met a girl with big brown eyes on the school bus. That girl, Barbara, became the love of his life. They were together for 73 years, married for 67 of those years. The 'cutest campus couple' eventually moved into the house that Gordon built, where they had their daughter, Laura. Gordon was an extraordinary leader, managing the Muskegon plants for the former Sealed Power Corporation, now SPX Corp. He was known to be fair and brutally honest, something that earned him respect among union leaders. They honored him for his commitment to promoting labor-management cooperation, something he was so proud to receive. Gordon loved to hunt and fish with his friends, though in later years it was more card playing and drinking in a comfy condo. He spent many years on the golf course with his friends, Jim and Larry, or fishing with his friend Louie, and he loved his church friends in the Mayberry Group. He was fortunate to live a wonderfully long life, filled with travel and time with family and friends. He so missed friends long departed, like his school friend, Bob Reinhold, and will be happy to see them all again. Gordon is preceded in death by his parents, his brother, Larry, and many aunts, uncles, and cousins. He will miss those he leaves behind, including his wife, Barbara, daughter, Laura Eller, and her partner, Bob Miller, former son-in-law, Mike Brooks, sister, Bonnie, and brother, Ken, along with special friends, nieces, and nephews. Funeral services will be held at First Evangelical Lutheran Church, 1206 Whitehall Rd, Muskegon, on Saturday, December 18, 2021, at 2 p.m. The family requests that children under 12 not attend, and COVID safety protocols will be followed. In lieu of flowers, donations can be made in Gordon's memory to First Evangelical Lutheran Church or your local Salvation Army.

Gordon Bonifield, 88, passed away at home on Friday, December 10, after contracting Parainfluenza Virus Type 3. He was born in Grand Rapids and spent his childhood in Reed City, moving to Muskegon at age 10. He graduated from Muskegon High School,... View Obituary & Service Information

The family of Gordon Scott Bonifield created this Life Tributes page to make it easy to share your memories.

Gordon Bonifield, 88, passed away at home on Friday, December...

Send flowers to the Bonifield family.