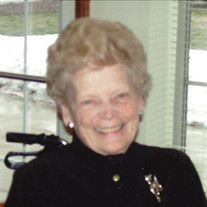 Gunhild Elsie “Gunner” McPherson, age 95, of Grand Haven passed away Friday, December 31, 2021, at Robbinswood Assisted Living. She was born May 21, 1926, in Chicago, IL to Herman and Elsa (Lundquist) Johnson. She married Robert Morgan on December 10, 1949, in Grand Haven and he preceded her in death on September 13, 1952. Gunhild then married Daniel Wetterman and he preceded her in death on February 15, 1973. She then married Donald L. McPherson on September 10, 1994, and he preceded her in death on March 24, 2007. Gunhild graduated from Grand Haven High School and then went to Ravenswood Hospital in Chicago for three years of nurses training to become a Registered Nurse and worked at North Ottawa Community Hospital her whole nursing career until her retirement in 1993. She was a member of Second Reformed Church in Grand Haven and a member of the poker club with a group of lifelong friends for many years. Her other interests were entertaining, travel, being a homemaker and most importantly taking care of her family. She is lovingly remembered by her daughter, Kathleen (Harry) Morgan; two sons, Dennis (Carol) Wetterman and Dan (Kim) Wetterman; two stepsons, Dennis and Gary McPherson; four grandchildren: Lisa Downie, Daniel Downie, Jesse (Michal) Wetterman and Allie Wetterman; two great-grandchildren, Abner Wetterman and Sylvie Wetterman; daughter-in-law, Cuihong Pan; sister-in-law, Allene Johnson; and numerous nieces and nephews. She was preceded in death by three sons, Bill, David and Bob Wetterman; and her brother, Carl Johnson. A Memorial service will be held at 11 a.m. Friday, April 8, 2022, at the Spring Lake Chapel of Sytsema Funeral & Cremation Services, 213 E. Savidge St., Spring Lake, MI 49456 with Pastor Lary Jackson officiating. Friends may meet the family one hour prior to the service. Interment will be in Lake Forest Cemetery. Memorials in honor of Gunhild may be given to Second Reformed Church. Arrangements entrusted to The Spring Lake Chapel of Sytsema Funeral & Cremation Services, 213 E. Savidge St., Spring Lake, MI 49456. Share memories with the family at their online guest book at www.sytsemafh.com.

The family of Gunhild Elsie "Gunner" McPherson created this Life Tributes page to make it easy to share your memories.