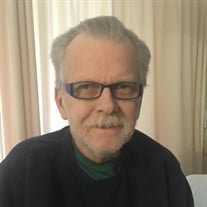 Harry J. Kerbuski, age 74, passed away on Sunday, April 10, 2022, in South Bend, Indiana following a courageous battle with dementia with loved ones by his side. He was born on July 19, 1947, to Russell and Lula Kerbuski in Muskegon and lived his lifetime there. Harry was very social, striking up a conversation with anyone and there wasn’t a soul he met that he didn’t like. Harry enjoyed playing baseball, softball, and bowling. He always had time for a game of cards with his dad or anyone else willing to play. Harry had a passion for cooking and would make the best chili, tacos, and potato, onion, hamburger combination that his children still cook to this day. He loved spending his summer days at the beach with his family and taking care of his lawn and garden, which usually included the girls getting sprayed by the hose. Holiday celebrations and spending time with his family, especially his grandchildren are always treasured times. Later in life, Harry valued time with his girlfriend of 23 wonderful years. Together they would watch the Detroit Tigers and go to the casinos. They were rarely seen without the other. Harry loved deeply and he will be deeply missed by those that knew and loved him. Harry is survived by his daughters, Amy (Mike) Wachowski, Kelley (Deon) Barton, Olivia (Eric) Bowman; significant other, Barb Najar; grandchildren, Grace, Eliana, Deonah, Davaun, Cole; and several nieces and nephews. He was preceded in death by his parents, and brothers, Jack, Tom, Pat and Dick. A graveside service for Harry will take place on Wednesday, April 13, 2022, at 2:00 pm at Sunrise Memorial Gardens (2188 Remembrance Drive). Arrangements entrusted to The Lee Chapel of The Sytsema Funeral & Cremation Services, 6291 S. Harvey St. Norton Shores, MI 49444. A celebration of Harry’s life will be announced at a later date. Feel free to sign the family’s online guestbook and share a memory at www.sytsemafh.com.

Harry J. Kerbuski, age 74, passed away on Sunday, April 10, 2022, in South Bend, Indiana following a courageous battle with dementia with loved ones by his side. He was born on July 19, 1947, to Russell and Lula Kerbuski in Muskegon and lived... View Obituary & Service Information

The family of Harry James Kerbuski created this Life Tributes page to make it easy to share your memories.

Send flowers to the Kerbuski family.