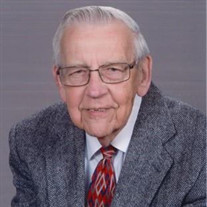 Harry Casper Waters, 94, died December 2nd, 2021, at Mercy Health Hospital, Muskegon, Michigan. Harry was born in 1927 in Muskegon to Harry Nathan and Mable (Casper) Waters, whose families go back to the early industrial (lumbering, milling, foundry) era that laid the foundation for the western Michigan port city of Muskegon. His early elementary school was Angell School. His family, including sisters Marva and Carol, moved to Montague, MI in the mid-1930’s renting a store front for the family meat market-grocery, and living in the building’s upper apartment. Harry was in the Montague school system until the advent of the A&P chain grocery in Montague resulted in the family returning to Muskegon Lake’s shores, settling into a home in North Muskegon on Ruddiman Drive. His last 2½ years of high school were at North Muskegon and he graduated there in 1945 - he was named class Valedictorian and was voted top Couples Dancer by classmates. He enlisted in the Navy that same year, just prior to the end of WWII, training & serving in the naval reserve in Chicago. After discharge from the Navy in 1946 he began working his way through college starting off at Muskegon Junior College. Harry married Helen Crankshaw in September 1949. They welcomed their first child (Paul) in September 1950. Harry completed a Bachelor’s degree in Business Administration: Accounting and Corporate Finance major, with an Engineering minor, at the University of Michigan, Ann Arbor in 1951. He was the first college graduate and skilled professional worker in his family. Harry was a career financial management professional. After working in Niles (b. Patricia) and Albion (b. James), in 1955 Harry and Helen returned to Muskegon County with their three young children in tow. Harry had landed a job with Kaydon Engineering Corporation. A house was rented on Monroe Ave. in downtown. In 1957, Harry & Helen purchased their first home and settled in the still somewhat rural, forested southern Muskegon County shoreline area, Norton Township. The township had launched into the post-WWII business and residential development boom. Their home was on West Manitou Circle, near Harry’s sisters Marva (Bob) Webster (Bob, Sue, David) and Carol (Ed) Gatfield (Bill, Scott, Sherrie). In 1969, the family moved to Applewood Lane and in 1977, Harry and Helen made their final move, to Norton Hills Road. Harry retired in 1990 after working many years as Treasurer/Controller for the Nugent Sand Company. After retirement, he continued to work part time taking care of taxes for local small businesses, and as a consultant/agent assisting with life insurance and Medicare choices. Harry participated in his local church (Mona Shores Baptist, now Shores Community), and served in his professional community (National Association of Accountants - Muskegon Chapter past president, and the National Management Association) through most of his life. He was also active in the local community including with Boy Scouts Troop 52, and with Junior Achievement as a teacher/advisor. He was a good neighbor, and a devoted husband. Harry & Helen (married for 64 years) were always attentive to home care and improvement projects. They both loved music and encouraged that connection in their children. Harry and Helen enjoyed traveling. They made a series of vacation road trips while raising their children, and later traveled extensively throughout North America and overseas (Hawaii, Europe, Russia, Panama Canal/Caribbean) over the course of their peak “empty-nest” years. Harry was preceded in death by wife Helen (2014) and son Paul (2020) and is survived by: daughter Patricia Waters (Joseph Harding) of Indianapolis, IN, and son James of Norton Shores, MI; grandchildren Paul Waters II (Teresa) Whitehall, MI, Kathleen Waters (Blackburn) Muskegon, MI, Rose Harding (Belmont, IN) and Grace Harding (Indianapolis, IN); great grandchildren: Claire, Emma and Lily Blackburn, Stewart Waters and Bryce Pawlowski (Rockford, MI). The family is grateful for the generosity and kindness of friends and neighbors especially in the last couple of years as Harry was becoming less physically capable, but still wanted to live at home which, with some help, he was able to do until the end. Harry’s was a life well lived. A Spring 2022 memorial will be announced.

The family of Harry C. Waters created this Life Tributes page to make it easy to share your memories.

Send flowers to the Waters family.