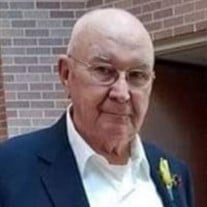 Howard L Teasley age 88, of Grand Haven passed away Monday November 15, 2021. He was born April 21, 1933 in Newaygo to John (Jack) and Myrtle (Plank) Teasley. He moved to Grand Haven at a young age, returning in the summers to a place he loved so much (Croton MI), to help his grandma, Uncle Hank and Uncle Steward on the family farm. He learned many life lessons from his uncles that he passed on to us, honesty, work ethic, and that family matters. He met the love of his life, Barbara Szymas in Grand Haven and married her June 22, 1957. They recently had celebrated their 64th wedding anniversary, before her passing on August 1st. Together they built their own farm in Robinson Township, raising chickens, rabbits, pigs, and their five children. Howard loved living there, enjoying building and fixing things in his pole barn, gardening, and teaching their children the value of working for what you want in life. In 1954 he entered the U.S. Army for 2 years and was stationed at Fort Sill, Oklahoma. After returning to Grand Haven, he worked at the Gulf gas station, Oldbergs,and finishing his career at Dake Mfg as a Service Technician. Howard was also known to have a second side job to provide for his family. He was involved in the formation of the Robinson Township Fire department and was on the Robinson Township board. After retirement, Howard worked at Evergreen golf course and wintered in Zephyrhills Florida where he was very involved with activities at Palmview Gardens Park. He and Barb were even King and Queen of the park one year. St. Anthony Catholic Church played an important part in his life. Along with Barb they were very active in the community there, making many lifelong friends. He was an Altar server, Lector, usher and a member of the Parish Council. Howard is survived by five children: Lorrie (Paul Buckner) Henrickson, Joe (Cathy) Teasley, Marcie (Tim) Lynch, Hank (Deb) Teasley and Bob (DeeDee) Teasley; grandchildren: Greg, Kyle (Abby), Rachael (Zaven), Matthew (Emily), Andrew (Brittany), Alicia (Chris), Staci (Zak), John (Cam), Steven (Sarah) and Hanna (Alec). He also had great grandchildren including, Joseph, Leilany, Max, Mya, Lizzie, Kailden, Kaci, Sophie, Hadley, Brody, Noah, Harrison, and Ryder; sister, Tini (Bob DeCamp) Teasley; brother, Stew (Rob); sisters-in-law, Mary Szymas, Mary Teasley; many nieces, nephews including nieces, Melissa Morren and Julie Johnson who helped care for him, and very special caregiver, Brenda DeJong. He was preceded in death by his parents; brothers, Jim and Leon Teasley; sisters: Barbara Wolf, Frances (Mike) Heibel, Doris (Chuck)Yahne, and the greatest man he ever knew Henry J Plank. Howard was a husband, father, and grandfather. His family was important in his life and he was happiest when they were all together. His children are grateful for care he gave to Barb during her dementia. The family would like to thank neighbors who shared their friendship and help. We would like to thank the staff at American House and Hospice who took care of dad during his final days. Howard Teasley’s life will be celebrated with A Memorial Mass 11:00 AM Friday, November 19, 2021, at St. Patrick – St. Anthony Catholic Church. Visitation will be held 5-7 PM Thursday, November 18, 2021, at The VanZantwick Chapel of Sytsema Funeral & Cremation Services, 620 Washington Ave, Grand Haven, MI 49417 with a Rosary at 7 PM. Family will also meet friends and family one hour prior to the service at the church. Masks are encouraged while inside with all the people, along with hand sanitizer. We encourage the virtual service for those that have their own health issues or concerns as we respect everyone’s view and Dad/Howard would want you to be safe. He and Bob talked about this numerous times. Memorial contributions in memory of Howard may be given to your local food pantry in honor of Dad as we remember the struggles he experienced growing up and his desire that others not go through the same. Please sign the family’s online guestbook at www.sytsemafh.com.

Howard L Teasley age 88, of Grand Haven passed away Monday November 15, 2021. He was born April 21, 1933 in Newaygo to John (Jack) and Myrtle (Plank) Teasley. He moved to Grand Haven at a young age, returning in the summers to a place he loved... View Obituary & Service Information

The family of Howard L. Teasley created this Life Tributes page to make it easy to share your memories.

Send flowers to the Teasley family.