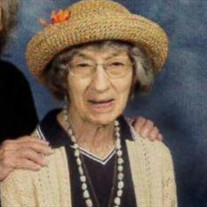 Irene Theresa Miegoc, age 97, passed away Saturday, October 2, 2021 at Sanctuary of McAuley. She was born August 4, 1924 in Muskegon to Albert and Bernice (Piegutkowski) Miegoc and lived her entire life in the area. Irene attended St. Michael Catholic Elementary School and graduated from Muskegon High School. She attended Muskegon Business College and earned her Associate of Arts degree from Muskegon Community College. She then earned her Bachelor of Arts and her first Master’s of Arts degrees from Western Michigan University and her second Master’s of Arts degree from the University of Michigan. Irene worked 25 years for Bennett Pump Company, 7 years for the County of Muskegon, and retired in 1989 from St. Michael Catholic Church. She was a lifelong member of St. Michael the Archangel Catholic Church where she was active with the Altar and Rosary Societies. She volunteered at St. Michael with the Divine Mercy Adoration Chapel, served as a Eucharistic Minister, a lector and commentator, and Senior Fellowship. Irene was also a member of the Catholic Daughters of the Americas Court #599 where she had been Past Grand Regent and Past State Officer. She was a member of the Polish National Alliance and the Polish Roman Catholic Union. Irene was a member of the American Association of Retired Persons, the Muskegon Color Camera Club and volunteered for Hackley Hospital. She enjoyed sewing and crafts. Irene was an extensive world traveler and had been to every continent in the world. Survivors include her sister, Christine M. Miegoc of Norton Shores; her church family at St. Michael Catholic Church; and several cousins and extended family in Poland. She was preceded in death by her parents and brother, Richard Miegoc. Mass of Christian Burial will be celebrated 11:00 AM Thursday, October 21, 2021 at St. Michael the Archangel Catholic Church (1716 Sixth Street) with Rev. Charles D. Hall presiding. Visitation will be held one hour prior to the Mass with the Rosary prayed by Sr. Agnes Mary Wojtkowiak at 10:00 AM at the church. Interment will take place at St. Mary’s Cemetery. Memorial Contributions may be directed to St. Michael the Archangel Catholic Church. Arrangements handled by The Walburn Chapel of Sytsema Funeral & Cremation Services, 1547 W Sherman Blvd, Muskegon, MI 49441. Sign the online guestbook at www.sytsemafh.com

Irene Theresa Miegoc, age 97, passed away Saturday, October 2, 2021 at Sanctuary of McAuley. She was born August 4, 1924 in Muskegon to Albert and Bernice (Piegutkowski) Miegoc and lived her entire life in the area. Irene attended St. Michael... View Obituary & Service Information

The family of Irene Theresa Miegoc created this Life Tributes page to make it easy to share your memories.

Send flowers to the Miegoc family.