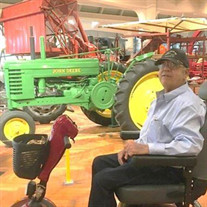 Jack Harrington, born on March 16, 1946 in Muskegon, the son of Lucille and Clarence Harrington, passed away peaceably on January 29, 2022. He is survived by his wife, Sherry, of 54 years and three children, Carey (Joe) Hebert, Jenifer Martin, and Mark Harrington, as well as six grandchildren: Jacqueline (Hebert) and Garry Hayes, Caleb Hebert, Jolene Harrington, Kaylea Martin, Gabrielle Hebert, and Hunter Harrington. His sister, Jan Harrington, preceded him in death. Jack was an Army Veteran, a member and chaplain of American Legion Post 9, a past president and current board member of the Muskegon Anglers Association, and past board member of Sportsman for Youth. He was also an avid hunter and fisherman where he enjoyed offshore “big lake” fishing for Coho Salmon, Chinook, Lake Trout and Steelhead. One of his favorite hobbies included driving his 1957 420 John Deere tractor as well as collecting the many varieties of John Deere farm tractor models and memorabilia. Jack was a dedicated member of Calvary Baptist Church of Muskegon since his birth. He served in many roles including usher and it is where he met and married Sherry (Bonebrake). Most recently, Jack and Sherry were members of Lakeshore Baptist Church in Grand Haven. A Funeral Service will be held 3:00PM on Tuesday, February 1 at The Lee Chapel of Sytsema Funeral & Cremation Services, 6291 S. Harvey St., Norton Shores, MI 49444. Visitation with the family will be from 6:00 - 8:00PM, Monday, January 31. Burial to take place at Norton Cemetery. In lieu of flowers, memorial contributions in Jack's memory may be directed to Sportsmen for Youth.

Jack Harrington, born on March 16, 1946 in Muskegon, the son of Lucille and Clarence Harrington, passed away peaceably on January 29, 2022. He is survived by his wife, Sherry, of 54 years and three children, Carey (Joe) Hebert, Jenifer Martin,... View Obituary & Service Information

The family of Jack Harrington created this Life Tributes page to make it easy to share your memories.

Send flowers to the Harrington family.