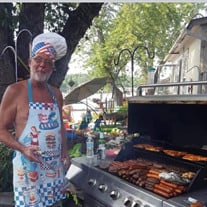 Jacob Phillip Meyers, age 62, passed away Monday, November 29, 2021, at home. He was born August 13, 1959, in Grand Rapids, MI to Phillip Jacob and Dottie Jean (Howell) Meyers. Jacob graduated from Fruitport High School and worked as a commercial construction supervisor for Copper Rock Construction. In the last fifteen years Jacob has driven his Chevy Silverado well over one million miles across the country, doing construction building across the lower 48 states. Jacob loved hunting, fishing, hot rods, dirt bikes, and his pride and joys were his 1971 and 1973 Cuda’s. He also enjoyed bowling, having just started up bowling in the 747 league at Northway Lanes with his three sons as a team. Jacob was the “Grillmaster” at all family gatherings, and if you called him, you knew you would be on the phone for an hour. He is lovingly remembered by his childhood friend and love of his life, Nancy Costa- Meyers; three sons: Phillip Meyers, Jason (Autumn) Meyers and his children, Jazlynn and Eleanor; Joey Meyers and his children, James and Jasper; daughter, Ashley Meyers and her children, Kaleigh, Laylah, Herman Jr., and Ariella; daughter-in-law, Heather Meyers; four sisters: Janice (Rich) Ferguson, Jeannie (Rick) Behm, Jill (Doug) Wall, and Jackie Yore; and numerous nieces and nephews. He was preceded in death by his parents, and sister, Ginger Brege. A memorial service for Jacob will be held at 11:00 a.m. Saturday, December 4, 2021, at Spring Lake Presbyterian Church with Rev. Daniel Anderson officiating. Friends may meet the family one hour prior to the service at church. Arrangements entrusted to The Spring Lake Chapel of Sytsema Funeral & Cremation Services, 213 E. Savidge St., Spring Lake, MI 49456. Memorials to Every Woman’s Place are appreciated. Share memories with the family at their online guest book at www.sytsemafh.com The funeral will be live streamed at the following link: https://www.facebook.com/Spring-Lake-Presbyterian-Church-120987261250386

The family of Jacob Phillip Meyers created this Life Tributes page to make it easy to share your memories.

Send flowers to the Meyers family.