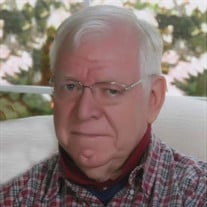 James Raymond Bozeman “Jim” was born in Laurens County Georgia on February 12, 1932. He was greeted by Jesus his savior in Heaven on November 1, 2021 at age 89. Jim was one of ten children born to John Wesley and Nellie (Mackey) Bozeman. He was preceded in death by his parents and five of his siblings: John Wesley Jr. (Betty Garret), Helen Alice (Harold Grevel), Betty Grace (Donald Greenblat), Cecil Riley (Joyce Rogers), and infant Joann. He is survived by three sisters: Peggy Ann (Walter) Goetz, Lucy Ella, Nellie Jo, and one brother, Peter Michael (Lisa). Jim’s family moved from Georgia to Michigan in 1937. He graduated from Muskegon High School in 1950. Along with all of his brothers and brothers-in-law, Jim served his country in the military. He enlisted in the Army in March of 1951, serving as a communications specialist in Okinawa during the Korean Conflict. He was honorably discharged in February of 1954. With the assistance of the GI Bill, Jim attended Muskegon Community College, where he met his future wife Adele. He went on to graduate from Michigan State University where he earned a degree in Packaging Technology in 1959. On June 19, 1959, after a four year courtship, Jim married his beloved Adele, and they enjoyed 60 years of marriage, until she preceded him to eternity on September 19, 2019. In 1962, Jim and Adele moved their family into their forever home in Norton Shores. Having moved several times during his childhood, Jim took pride in providing this stable home for his family for 55 years. Jim is survived by his three children, Julie (David) Stegink, Jeffrey (Christine), and Jill (Bruce) Bustin; five grandsons, Carl James and Jacob Michael Bozeman, Michael Roland and Brendan James Bustin, and Denver Reese Stegink, and two step-grandchildren, Stefan and Alex Johnson, as well as many neices and nephews, all of whom will remember his kindness, wisdom and wit. Jim attended Central Reformed Church, then Covenant Community Church RCA. He enjoyed playing golf and enjoyed the beauty of Lincoln and Hickory Knoll golf courses. His family enjoyed Jim’s gardening and the fresh vegetables were special. His last residence was Seminole Shores Center. A MEMORIAL SERVICE celebrating Jim’s life will be held at 2:00 P.M. on Saturday, November 13, 2021, at The Lee Chapel of Systema Funeral & Cremation Services, 6291 Harvey Street, Norton Shores, Michigan, 49444 with Rev. Timothy Vander Haar of First Congregational Church officiating. VISITATION will be one hour prior to the service. Burial will be in Restlawn Cemetery. MEMORIALS in Jim’s memory may be directed to Harbor Hospice Foundation. You may sign his online guestbook at www.sytsemafh.com

The family of James Raymond Bozeman created this Life Tributes page to make it easy to share your memories.

Send flowers to the Bozeman family.