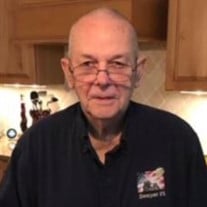 Mr. James Jerome Casey, age 84, passed away on Monday, November 15, 2021 at his home surrounded by his family. He was born in Chicago, Illinois on September 25, 1937 to James B. and Margaret (Visokey) Casey. James was a veteran of the United States Marine Corps having served active duty from 1957-1960 and reserves from 1960-1963. He created a brotherhood with his fellow Marines and enjoyed the friendships he continued throughout his life. He had been employed by Hughes Builders for over 20 years prior to his retirement. James loved fixing things, building things, and was quite well known for his handyman skills. He loved to keep busy and was always willing to lend a hand, especially to people who were in need. James enjoyed bowling, model trains, and decorating his home with Christmas villages. James also maintained an impressive vegetable garden, a task he did lovingly for his wife. He held a special place in his heart for his loyal companion, his dog, Seamus. On June 8, 1963, James married the former Charlotte M. Barre in Chicago, and she survives him along with their sons, Shaun (Christine) Casey and Patrick Casey; daughter-in-law, Holly Sietsema-Casey; six grandchildren, Amanda, Stephanie, Steven, Jack, Patrick “Patch”, Caroline; five great-grandchildren, Alex, Ethan, Jaxon, Devon, Gisselle; brothers, Edward (Paula) Casey and Jerry Casey; and sister, Loretta Magee. He was preceded in death by his parents; parents-in-law, Ralph Barre and Dorothy VanPelt; brother, Philip Casey; and siblings-in-law, Donald Magee and Priscilla Casey. All are invited to join his family at 2:30 PM Friday, December 3, 2021 at Fort Custer National Cemetery where military honors will be performed. You may sign his online guestbook at www.sytsemafh.com Arrangements by The Sytsema Chapel of Sytsema Funeral & Cremation Services, 737 E. Apple Ave., Muskegon, MI 49442.

Mr. James Jerome Casey, age 84, passed away on Monday, November 15, 2021 at his home surrounded by his family. He was born in Chicago, Illinois on September 25, 1937 to James B. and Margaret (Visokey) Casey. James was a veteran of the United... View Obituary & Service Information

The family of James Jerome Casey created this Life Tributes page to make it easy to share your memories.

Send flowers to the Casey family.